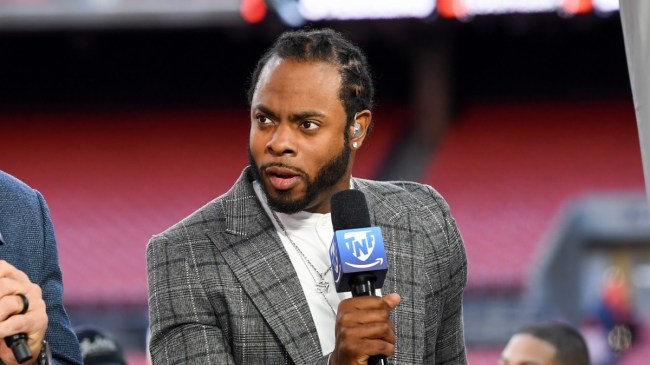 Russell Wilson and Richard Sherman played on some great Seattle Seahawk teams together. The quarterback and cornerback won one Super Bowl in Seattle, came oh-so-close to another, and had plenty of chances to get back to the big game.

But, things between the two former star teammates may not be kosher. Sherman had pointed comments for Wilson after he and his Broncos teammates played atrocious football in Thursday night’s 12-9 loss to the Colts.

Though the shots were veiled, anyone reading in between the lines could tell that he was going after Wilson.

Richard Sherman throwing so much shade at Russ basically saying the Broncos defense needs to be the Legion of Boom to carry Russ to a title 😂 pic.twitter.com/Rt2WxrBHg9

Then, he implied that Russell Wilson is stealing from the Broncos after he signed a megadeal with the franchise in the offseason.

Richard Sherman does not like Russ. Clowning the Broncos by singing, "They been hit by…a smooth criminal. " 🤣🤣🤣 pic.twitter.com/2HYscFoxgE

And, with the game on the line in overtime facing a 4th and 1, the Broncos elected to pass rather than run the ball. Sound familiar? It did to Sherman.

Richard Sherman let it all out in the postgame show:pic.twitter.com/s367JfpNOk

No one is really sure why the former all-pro corner has beef with Wilson.

richard sherman is the kind of hater i respect. absolutely no hiding his feeling, looking at the camera and kicking russ when he’s down

Richard Sherman's never gonna tell us why he hates Russ huh? Just gonna keep posting gifs and taking shots whenever he can lmao


Either way, it sure is entertaining for all of us.