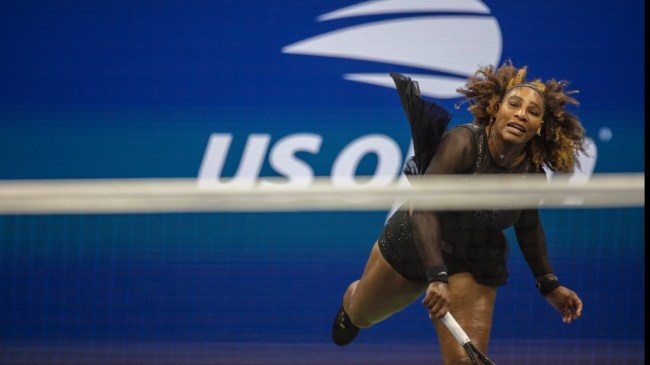 Serena Williams just keeps on winning at the US Open.

No one knew what to expect from Serena Williams at this year’s US Open, The 23-time grand slam champion had only a half-dozen matches this season coming into the Open, a tournament she has hinted at being her last.

Williams has looked like vintage Serena. The nearly-41-year-old rolled over Donka Kovinić on Monday, winning 6-3 6-3. She faced a much more formidable opponent in world-number-two Estonian Anna Kontaviet Wednesday evening in front of a packed Arthur Ashe Stadium.

Serena won the first set in a  tiebreak, before dropping the second set 2-6. Ultimately, she played her best tennis of the year in an epic third-set that had Ashe rocking. She defeated Kontaveit 6-2 in that third set to advance to the third round on Friday. Now, people are wondering how far Serena can go.

Nate Ryan is one of those people who think Serena can go all the way.

Just awesome sports magic around Serena’s farewell. Whole crowd standing. Leaving it all out on the court she’s spent her life on. If plays like she did tonight, she can win the #USOpen! 👏🙌 pic.twitter.com/0XGlq7uCKq

Celebrities Are Behind Serena Williams

In what is likely the final tournament of her career, Serena Williams will get the rich and famous out to watch her play, especially in New York City.

Tiger Woods was in Ashe for her 2nd-round win and tweeted her congratulations after the match.

It was a privilege to watch greatness. Congrats @serenawilliams

Steph Curry was not in attendance, but he shouted out the GOAT as well.

Not done yet @serenawilliams 🙏🏽

Celebrities like Bill Clinton, Anna Wintour, and Spike Lee have been spotted watching Williams this week.

Her second-round match against Kontaveit broke the attendance record for a night session at Arthur Ashe Stadium. She broke that record two days after setting the record in her first-round match.

It’s no surprise that tickets are in high demand, given that it could be her final tournament and its location in New York City. It’s still a pretty penny, though, as prices are increasing seemingly every time she wins.

Tickets on secondary market site StubHub were up over $450 Thursday afternoon just to get into Ashe for Williams’ Friday night third-round match against 45th-ranked Ajla Tomljanović.

Many bought tickets for individual sessions long in advance, and are enthralled with how it turned out, as they got tickets to what will be the tennis event of the year Friday Night without breaking the bank like those on the secondary market will.

@marinafromdabloc on Twitter is one of those lucky ticketholders.

Sportsbooks take notice of her play

Williams was around a 50-1 shot to win the tournament coming into it by various US-based sportsbooks. She’s now down to around 15-1.

Since midnight ET, Serena Williams has received 82% of the bets and 77% of the money in the US Open outright winner market at @FDSportsbook.

If Williams could somehow win the tournament, it would be considered one of the great feats in sports history. The ticket prices for that final would be truly insane.