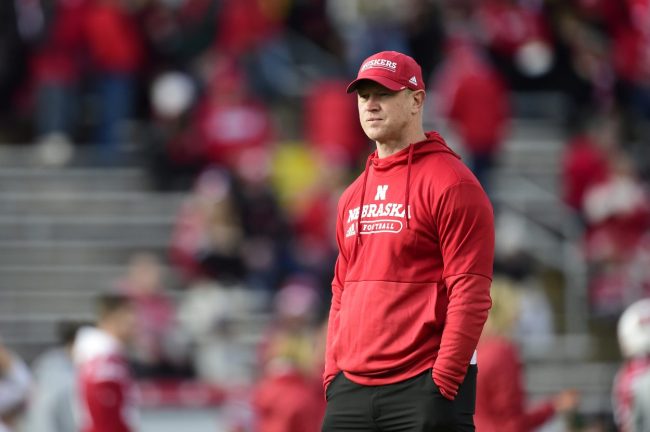 The Nebraska Cornhuskers have been nothing short of a disaster under head coach Scott Frost. The high-water mark for the program was a 5-7 record in 2019. Overall, Frost is just 15-24 in the four seasons at the helm of his alma mater.

In fact, the Huskers haven’t been competitive since a 9-4 season under Mike Riley in 2016. The last time the program won 10 games was a decade ago, in 2022, under Bo Pelini. Pelini won 10 games three times in seven seasons as Nebraska’s head coach. He won nine games in each of the other four seasons.

But the program felt that wasn’t good enough and opted to move on. Since then, the Huskers are a combined 14 games under .500.

Frost seems to thinks the program is moving in the right direction, however, and offered a unique stat to prove his point.

Introducing PPP, or pukes per pracitce.

“It’s not because they’re not in shape – he’s just working them hard.”

According to Frost, the Nebraska offensive line is averaging 15-20 PPP under new offensive line coach Dominic Raiola. Raiola, whose son Dylan is an elite quarterback committed to Ohio State, is a Nebraska grad who played 14 NFL seasons for the Detroit Lions.

Evan Bland of the Omaha World-Herald first reported the story.

“It’s not because they’re not in shape – he’s just working them hard,” Frost said. “I think they love it. He’s kind of freed them up to go be aggressive and I love the way they’re coming off the ball.”

While Frost seemed happy to report the news, many in the football world didn’t find it as amusing.

Definitely something to celebrate 🤦🏻‍♂️🙄 https://t.co/msE6yXwihT

I’ve been in 13 training camps between college and the NFL. Half of those were 2 a days. I don’t believe I’ve seen 15 total times an OL puked at practice. So either he’s lying about this number or it’s extremely unhealthy. https://t.co/gqkh0pKsQF

The old school mentality of coaching needs to go. Use those w/ kinesiology backgrounds instead of a former player to help control volume/workload. Increasing risk of injury and potentially death for a “badge of honor” is pathetic. Fade Nebraska! https://t.co/qmqdjniCxh pic.twitter.com/EqmgMYGnPh

All of that to still get their ass WHOOPED! That’s still very unhealthy. https://t.co/G5JuRVKWZQ

Nebraska begins it season with a Big Ten west showdown against Northwestern on Aug. 27.

These are out of this world (literally). https://t.co/gVzBx8bFnd

If all else fails, maybe the Huskers can just puke on the Wildcats to keep defenders out of the backfield?h