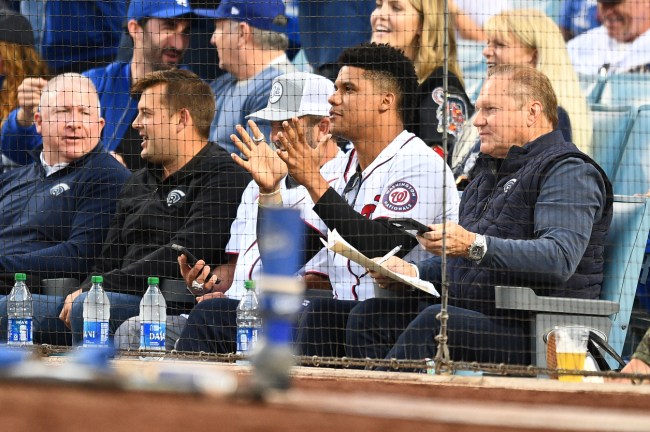 Washington Nationals slugger Juan Soto has been in a ton of headlines recently. The All-Star rejected a $440 million extension from the Nationals, and trade talks have kicked off at full speed.

Then, Soto won the Home Run Derby in a thrilling finish against Seattle Mariners youngster Julio Rodriguez, even though Rodriguez hit the most home runs of the night.

However, according to Soto’s agent, Scott Boras, the Nationals ‘refused’ to send him on a charter flight, and the superstar flew commercial (h/t Cydney Henderson of USA Today).

Less than 24-hours before Soto hoisted the 2022 Home Run Derby trophy at Dodger Stadium on Monday night, the 23-year-old outfielder was waiting in an airport for a commercial flight, all because the Nationals refused to charter a flight for Soto to Los Angeles, days after he rejected a record 15-year, $440 million contract extension.

So, the Nationals didn’t charter Soto over there, and perhaps there are hard feelings about him turning down that contract offer. Scott Boras went on to blast the Nationals and the MLB for this turn of events (h/t Stephanie Apstein of Sports Illustrated).

“All I know here is that the Atlanta Braves and Juan Soto played a game yesterday. The Atlanta Braves arrived here five hours earlier than Juan Soto did. You know why? Because their team chartered a plane. Juan Soto had to fly on a commercial flight and wait in an airport for two hours and get here at 1:30 in the morning and have to compete in the Home Run Derby. And that’s something that Major League Baseball did not take care of and that’s something that the Washington Nationals did not take care of.”

Sure, Juan Soto turned down the deal, but this is a terrible look for the Nationals. Soto arrived late and still won the Home Run Derby.

Nonetheless, he might not be in Washington, D.C., much longer.