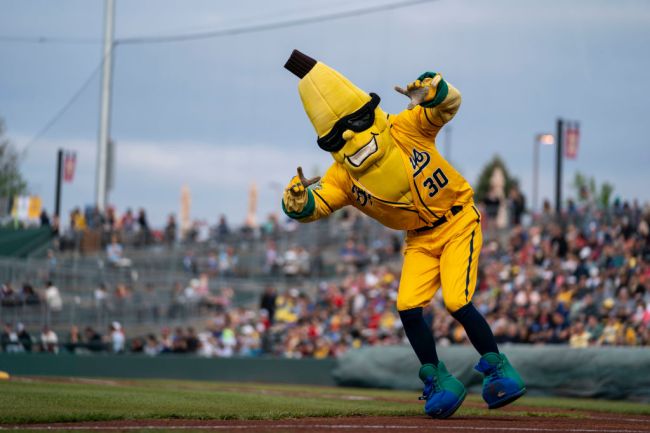 The Savannah Bananas are easily the most popular minor league baseball team in the world. Even after going viral a number of times in the last year, they somehow just keep finding ways to one-up their hilarious antics.

Back in April, the Savannah Bananas were the hottest team in baseball (literally) when one batter used a flaming bat to hit a single. Then, they brought back the Harlem Shake in an amazing walkout moment and put the ‘tallest’ pitcher in baseball history on the mound.

The Savannah Bananas just know how to deliver the unexpected and it’s no different four months later. The team has celebrated in crazy fashion before, but on Friday night, they delivered what might be their most unexpected celebration yet.

During the Banana Ball Summer Series, one player appears to pull a hammy while jogging home to score. But upon reaching the plate, he busts out some epic dance moves that are well worth the watch.

He faked a pulled hamstring before the epic celebration 😂 😂 😂@thesavbananas | @ESPNPlus pic.twitter.com/3YYRoM1DjK

He might’ve done his teammates dirty, but they were too busy hyping up his moves. It’s honestly amazing how they come up with this stuff and even more amazing to see it in action. The moment wasn’t the only highlight of the night either.

Remember the ‘tallest’ pitcher in baseball history? Well, he got his first hit. That’s right, he got a base hit while wearing stilts. Then he beat the throw to first. If they didn’t have the video, I might not have believed it.

Yes, you did see that right.

STILTS JUST GOT HIS FIRST HIT. WE REPEAT. STILTS GOT A HIT. pic.twitter.com/zx5IqhIpDl

If you’re somehow unfamiliar with the most entertaining team in baseball, you’re seriously missing out. The Savannah Bananas are an American collegiate summer baseball team that competes in the Coastal Plain League.

Since being founded in 2016, the team has sold out every single home game. How many MLB teams can you say that about?

With moments like the ones above, it’s no wonder people are loving the Savannah Bananas. The team is bringing a fresh spin to the sport and it’s been wildly entertaining.

While the 2022 Banana Ball World Tour has come to an end, there’s still an opportunity for fans to see all of the team’s hijinks. A new original series titled Bananaland is now streaming on ESPN+, giving fans a behind-the-scenes look at the team.