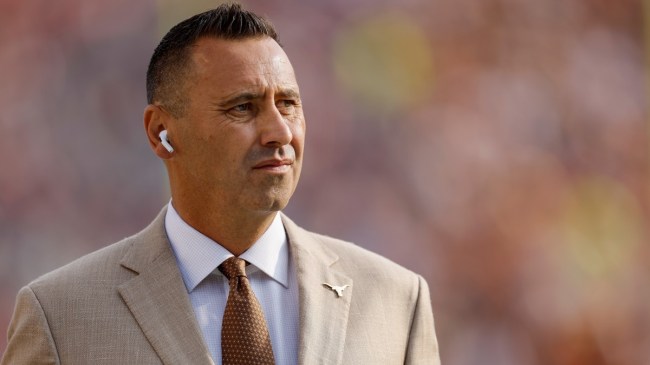 Last week’s 20-19 loss to Alabama was a positive sign for the Longhorn program and Steve Sarkisian. But, it didn’t come without a cost. Mega-hyped quarterback Quinn Ewers suffered a sprain of his AC joint late in the 1st quarter. And, the backup Hudson Card suffered a leg injury himself and was significantly limited physically.

So, there are questions about the quarterback situation will be for this weekend’s game against a frisky UTSA team that won 12 games a season ago. Sarkisian is not loving the media attention being put on the situation, especially after a drawn-out battle in camp.

Sarkisian went off on a reporter at a press conference Thursday

Steve Sarkisian had his normal Thursday press conference and he got a question he didn’t like.

Sarkisian: "You guys can keep poking the bear on what I do at QB. At the end of the day, I'm not going to give you game-planning decisions on how we practice. There's a reason you guys don't come to practice. If I wanted you to know who took snaps, I'd let you come to practice."

He’s turning into Nick Saban before our eyes. it just screams Saban, as he blames the media for his problems and turns the question around on them.

Some Texas fans like how he handles the media.

Huge fan of how Sark handles the media. Don’t give them anything. https://t.co/tWTY41mIt1

Of course, not everyone agrees with this kind of super-secretive treatment of the media.

The absolute worst thing to come out of high-profile college football over the last 10 years is treating your program like it's the nuclear codes https://t.co/jycRjk86ia

Charles Wright is the unknown

With Ewers definitely out, and Card battling his own injury, it could be unknown Charles Wright at quarterback for the Longhorns. Wright is a local product from Austin High school and was a mid-three-star recruit in the class of 2021. He had offers from Texas, Arkansas, and Iowa State among others.

It will be interesting to watch the quarterback situation in Austin play out until Ewers returns.