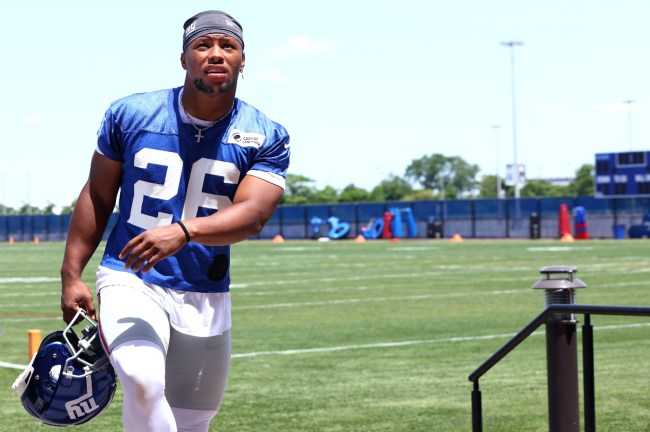 The crypto market has gone downhill quickly. Bitcoin seemed to be the up-and-coming new thing, but lately, it has taken a gigantic hit, and many athletes are affected in a massive way. One of them is New York Giants running back Saquon Barkley, who has lost an absurd amount because of this downward trend.

Check out this thread and get ready to see how much Barkley has lost because of it.

The New York Giants running back wasn’t the first athlete to get paid in #crypto, but his paycheck
was one of the biggest.

In 2021, Barkley was recovering from an ACL and meniscus tear and was looking at his career
in a new light.

At the time, #Bitcoin was worth over $60k but has since plummeted below $30k.

Meaning in just over a year, Barkley has lost over $5M!

Barkley lost $5 million in just one season after converting his contract to Bitcoin, and surely the Giants RB is regretting that decision all the more. Perhaps he should have chosen a different alternate investment, like real estate crowdfunding.

But Barkley isn’t the only one to lose a tremendous amount of cash.

Just a year ago, dipping into the Bitcoin market appeared to be a smart move. Many people were riding the wave, and athletes were converting their contracts to Bitcoin.

Jacksonville Jaguars QB Trevor Lawrence was one of them, but his investment has not gone as planned (h/t Michael McCarthy of Front Office Sports).

Back in 2021, the No. 1 overall pick in that year’s NFL Draft signed a deal with Blockfolio to convert his signing bonus (estimated at $22,630,055) into cryptocurrency. A year later, that same bonus is worth only $9.3 million — for an estimated loss of over $13 million.

Russell Okung also lost a lot of cash after turning some of his salary into Bitcoin. After seeing these repeated trends, perhaps players are going to steer far away from the Bitcoin industry in the future.

Sure, these athletes make a lot of money as is, but losing millions and millions is certainly not what they were expecting.