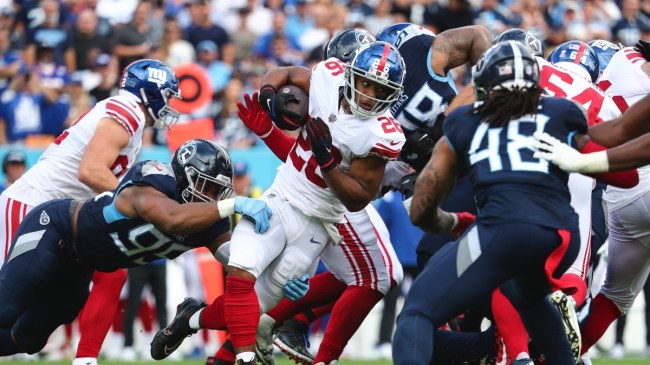 Giants’ Running Back Saquon Barkley lit the world on fire during his first two years in the NFL. The number-two-overall pick in the 2018 draft had over 2000 yards from scrimmage in his first year and over 1400 yards in his second year. But, he’s battled injuries the past two seasons and wasn’t himself.

Thankfully for Giants fans, the old Saquon Barkley is back. The Penn State alum has gone off against the Tennessee Titans on Saturday.

Saquon Barkley with another HUGE run! He fumbles at the end but Giants keep the ball! pic.twitter.com/ucbXyqHcj6

It’s not just those good runs from Barkley, either. He has been running effectively between the tackles and has looked good in the passing game as well. In short, it’s the back the Giants thought they were getting when they took him 2nd overall.

The burst that he was famous for is all of the ways back for the first time since his 2020 ACL Tear.

Saquon Scored On The Biggest Play Of The Game

And, late in the game he put the team on his back after his second long run and scored the go-ahead two-point conversion. It stood up after Titans kicker Randy Bullock missed a field goal that would’ve given the Titans the win. The Giants won, 21-20.

Giants Fans Are Thrilled With This Version of Saquon Barkley

Naturally, Giants fans are thrilled they have their star running back healthy again. @LetsTalkGmen says it is like Saquon has never left.

Saquon Barkley is BACK. Almost like he never left. He’s gonna be fun to watch this season

@Bthoms points out that many wrote Saquon off. But, he looks better than ever.

Remember a few months ago when everyone was writing off Saquon Barkley after he had a down year after coming back from a torn ACL? Yeah I bet you all feel foolish now

It remains to be seen if Saquon Barkley can keep it going all season long, but on behalf of NFL fans everywhere I hope he can.