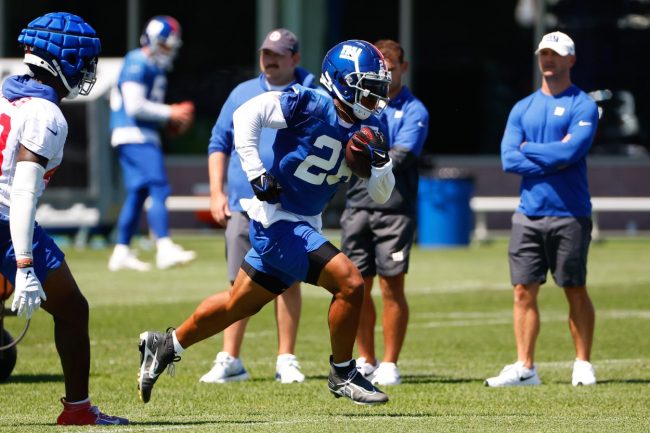 New York Giants running back Saquon Barkley has had a lot of hype surrounding him during the NFL offseason. The former No. 2 overall pick in the NFL draft had a jaw dropping rookie year where he put up 2,028 yaards from scrimmage and 15 touchdowns to make the Pro Bowl.

Since then, the Penn State product has been repeatedly hampered by injuries, including a torn ACL  that cost him all but two games in the 2020 season. In total, Barkley has played just 28 of 49 possible games in the last three years.

But now Barkley seems to be back to 100 percent and according to him he has his “swagger back” headed into the 2022 season. Giants fans seem to be back in on the star back as well, especially after a particularly ridiculous play in training camp that drew “oohs” and “aahs” from everyone in attendance.

Barkley was back at it again this week. But this time he was showing off his power.

Let's see what Saquon Barkley is up to and MY GOODNESS 😤😤😤😤

Barkley lowered the boom and absolutely trucked poor Aaron Robinson, a second-year defensive back out of UCF. That’s one way to set the tone in practice.

But the Giants’ defense didn’t seem to take too kindly to the play. Instead, it was the precursor to a huge brawl later in the practice that reportedly involved both players and coaches.

Practice fights, especially in the preseason, are nothing new in the NFL. Niners coach Kyle Shanahan pulled his entire team aside after a practice brawl just last week.

Is the Carolina Panthers quarterback competition already over? https://t.co/0E0WMwyDUx

But Giants fans have to like seeing that Barkley seems to have not only his agility, but also his power back heading into his fifth NFL season.