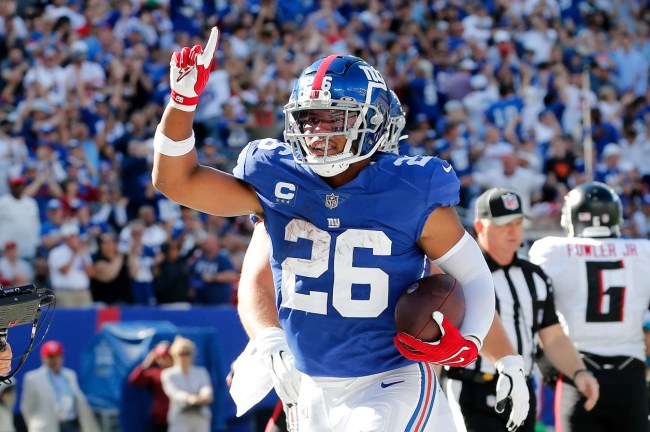 The New York Giants drafted Saquon Barkley and expected him to be the league’s next superstar. Unfortunately, it has been a rough career for Barkley up until this point.

Injuries have hit him hard, and a lackluster offense in New York hasn’t done him any favors, either. Yet, there is a ton of excitement surrounding Barkley for the 2022 season.

With training camp underway, the former Penn State star looks healthy and ready to roll for the season. Moreover, he made everybody drool with an eye-popping catch.

Check this out from Barkley.

.@saquon making this one-handed catch look too easy 🔥 (via @Giants)pic.twitter.com/Vwg9PShAtQ

That’s a sweet play by Barkley and hopefully a step in the right direction for him and the Giants offense.

The Giants hope Daniel Jones takes a step forward as the team’s signal-caller, and Kadarius Toney should have a strong sophomore campaign.

This play by Barkley got Giants fans ecstatic about the potential return of their star running back.

Can’t wait for him to stay healthy, pop off and show everyone he’s still one of the best
People just suddenly think him and CMC are fading and aren’t gonna bounce back? https://t.co/NwEfBUnVFw

He’s really like that he gon shine just wait on it https://t.co/6gbTj8hgL1

Best rb in the league

If Saquon Barkley can stay healthy and put together a strong season, the Giants could shock everybody in the NFL and make a push for the NFC East. You never know.