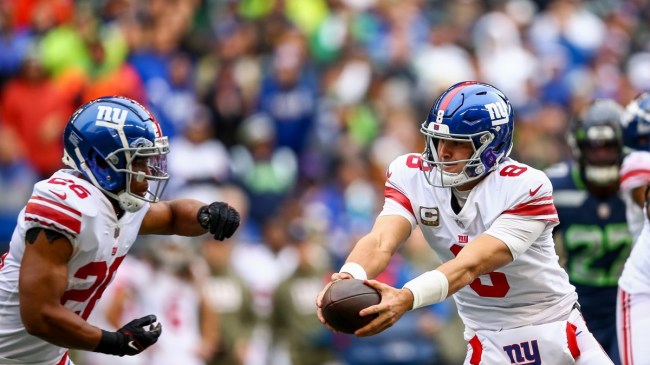 New York Giants Running Back Saquon Barkley has been sensational this year. The 5th-year player out of Penn State has fully healed from his devastating knee injury suffered in 2020 to arguably be the league’s best running back once again. All the tools are back for Saquon. His lateral quickness is once again the best in the league. He’s running with more power this year too and is still deadly in the open field. The Giants are miraculously 6-2, and he’s a huge reason why.

But, Barkley is a free agent at the end of the year. At the beginning of the season it could be argued that the G-Men shouldn’t re-sign him. After all, it looked like they were headed for a rebuild under first-year head coach Brian Daboll and first-year GM Joe Schoen. But, with the team very much looking like a playoff team, and Saquon being a bonafide MVP candidate, they need to re-sign him.

Unfortunately for them, they got some unwelcome news on that front.

The Giants were hoping to reach a deal with their star back during their week nine bye. But, it doesn’t appear that will happen.

The New York Giants and star running back Saquon Barkley will table any talks about a new contract until after this season:https://t.co/8mQnXmffDb

Schefter went on to say in the article, in part:

The New York Giants and star running back Saquon Barkley will table any talks about a new contract until after this season, league sources told ESPN.

Barkley and the Giants did not come close to hammering out a new deal during last week’s bye, according to sources.

General manager Joe Schoen previously had stated that the deadline for the Giants to complete a deal with Barkley was last Monday, which came and went without an extension. With that deadline behind them, Barkley and the Giants (6-2) now will focus on what’s ahead of them this season, starting with the Sunday home game against the Houston Texans.

Yikes. Not good for the Giants. They could franchise tag him, but it’s unclear if Barkley would even play on the tag. It’s risky for a running back to play on the franchise tag, and I would advise Saquon not to do that.

Either way, not what Giants fans wanted to hear before the 2nd half of their season. They take on the Texans in week 10.