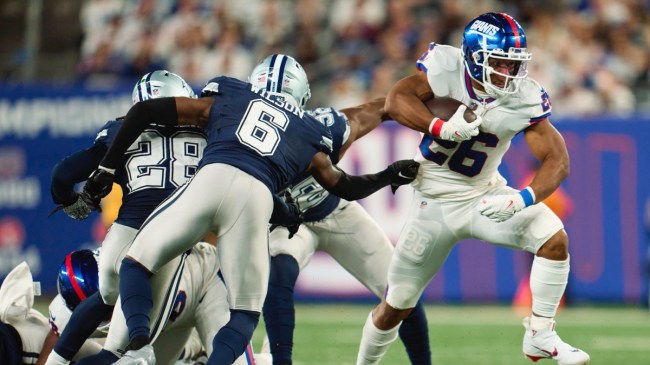 It’s been too long since we all saw the real Saquon Barkley. The former Penn Stater had a college career full of some of the greatest highlights you’ve ever seen. Then, he dominated the NFL his first two seasons after the New York Giants drafted him 2nd overall with 3500 scrimmage yards.

But, two injury-plagued seasons followed, and Saquon’s star dimmed. But, through three games in which he’s 2nd in the league in rushing and first in yards from scrimmage, NFL fans are loving what they see from the electrifying running back.

Barkley looked fantastic on Monday Night Football against the Cowboys

The nation got to see the fully healthy running back on display against the Cowboys on Monday Night Football. And while the Giants lost 23-16, he looked incredible.

There is not another running back in the league making that kind of cut.

Barkley finished with 14 carries for 81 yards and 4 catches for 45 yards for another day with over 100 yards from scrimmage. Most refreshing to Giants fans is that he looks to be a more complete running back this year. He’s been a player who has looked for the home run all the time. But now he is taking what the defense gives him.

NFL fans are loving what they see from Saquon

Saquon is so much fun when he’s healthy. That was sick

Full disclosure, I worked for Penn State football when he was a freshman, so I may be biased. But, when healthy, I really do think he is the best and so does this guy.

I remember watching Saquon Barkley during his freshman year training camp at Penn State. Penn State had a top-15 defense that year with a bunch of future pros on it. But, on his first carry of live football in camp, he went 70 yards for a touchdown. I knew then that he was going to be the best football player I’d ever be around. Now, he’s proving it in the NFL after fighting off injuries.

Saquon Barkley is such an unbelievable talent, man.

The NFL is a better place when he’s healthy. One of the best running backs in the game right now.

I hope he stays healthy because he could have a really special season.

Saquon Barkley is such an unbelievable talent, man.

The NFL is a better place when he’s healthy. One of the best running backs in the game right now.