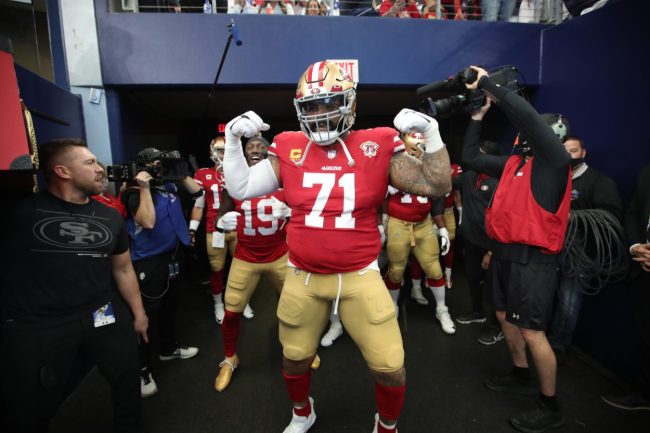 The San Francisco 49ers offensive lineman has made the NFL Pro Bowl nine times. He was named first-team All-Pro in 2021 for first time in his career. Now, he’s received another honor.

Williams was given a 99 overall rating in EA Sports Madden NFL 23. It’s the first time an offensive lineman has ever received the prestigious rating.

Welcome to the 99 club, Trent Williams 👏

Former teammate Adrian Peterson recorded the entire moment and Williams’ reaction was priceless, as the big man seemed at a loss for words. The ranking is well-earned. Williams has been one of the best offensive linemen in the league for the better part of a decade. But fans across the league felt that other lineman also could’ve been worthy of the distinction.

It's a couple 99's on the OL
Cleveland was ranked #1 OL
Zeller or Wyatt can easily be a 99
Quenton Nelson
Bahktari
The LT from eagles is powerful milati I believe his name
Tristan wirfs maybe not 99 but 95..

Fans also wondered why some other players weren’t 99, despite having similar accolades to Williams.

But the Back2Back MVP Aaron Rodgers isn’t a 99? And has never started the season as a 99?

Williams now has an honor that nobody can take away.