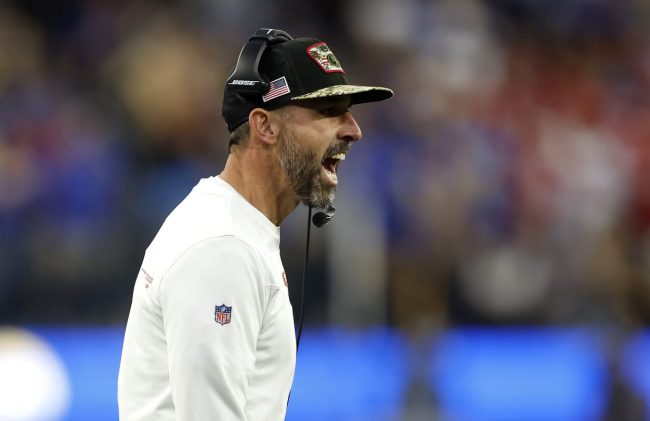 Training camp fights are nothing new in the NFL. They happen almost every year at every camp across all 32 NFL teams. In fact, a lot of coaches will tell you that if there isn’t at least one skirmish at camp that the intensity isn’t high enough.

Some coaches, however, aren’t going to tolerate that sort of behavior on their watch. And sometimes, too many training camp fights can undermine the ultimate goal.

That’s been the case with the San Francisco 49ers this offseason. And head coach Kyle Shanahan has had enough of it.

Kyle Shanahan Has A Message For 49ers Players

Kyle Shanahan doesn't think fights in practice have anything to do with how tough a team is:

"I think if most people voted who was the most physical team on tape last year, I think we'd win most of that. And we didn't get in one fight last year." pic.twitter.com/7fwgA6Unde

Shanahan stopped practice earlier in the week after his team’s second brawl and delivered a straightforward, stern message to his players according to ESPN’s Nick Wagoner.

“I want everyone challenging each other,” Shanahan said on Friday. “I don’t care how much crap each other talks; (and) I don’t care how close they get to fighting. They can do whatever they want to get themselves to be as intense as they want and bring the best out of each other, which happens a lot that way. And it’s the same on the field.

Wide receiver Brandon Aiyuk and linebacker Fred Warner were at the center of the discussion earlier in the week.

That's why things got heated in San Francisco?!?!https://t.co/iO6tC2mCpD

The Niners went 12-8 in in 2021 and fell to the Super Bowl champion Los Angeles Rams, 20-17, in the NFL Championship Game. If they can harness that emotion, San Francisco may be a force to be reckoned with in 2022.