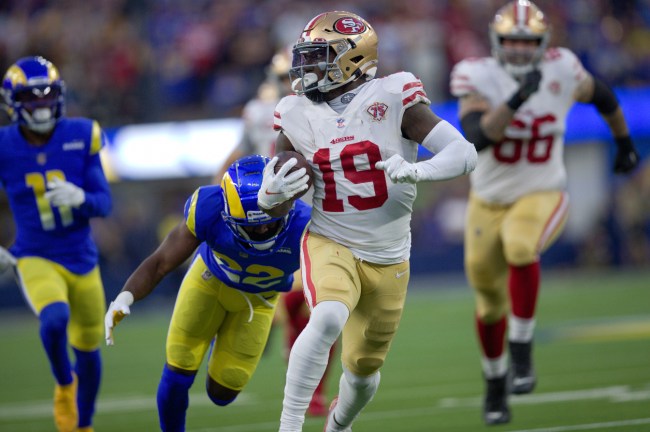 The San Francisco 49ers have finally made quarterback Jimmy Garoppolo available for trade. That is one domino to fall.

The next, and the biggest of the entire offseason, is the status of star wide receiver Deebo Samuel. The former South Carolina Gamecock has been wanting a new contract, and after the year he had, he definitely deserves it.

But, the 49ers have yet to give it to him, although John Lynch must know he has to pay Deebo. With training camp around the corner, everybody is holding their breath on a potential new Deebo deal.

However, things don’t look too promising, at least according to the latest report from NFL insider Tom Pelissero.

There’s no deal imminent between the #49ers and WR Deebo Samuel and it’s unclear whether he’ll report to mandatory Training Camp, per @TomPelissero

“There is nothing imminent as it pertains to Samuel and the Niners agreeing to an extension, and it is unknown whether he will report to training camp on Tuesday when veterans are scheduled to report.”

This comes shortly after Deebo Samuel got everybody fired up, and his trainer said he was about to get paid.

Maybe his trainer is just being optimistic. The 49ers want Deebo back, and he wants to be back in the Bay Area. However, it won’t be for cheap. Samuel exploded last season and was a massive reason for the 49ers’ trip to the NFC title game.

Those numbers are certainly worthy of a top-tier contract. But, for now, the 49ers might begin camp without their top weapon. With Trey Lance taking over the starting job, having Samuel on the field will be beneficial to everybody.