One San Francisco 49ers Rookie Is Reportedly Blowing Coaches Away, And It’s Not Who You’d Expect 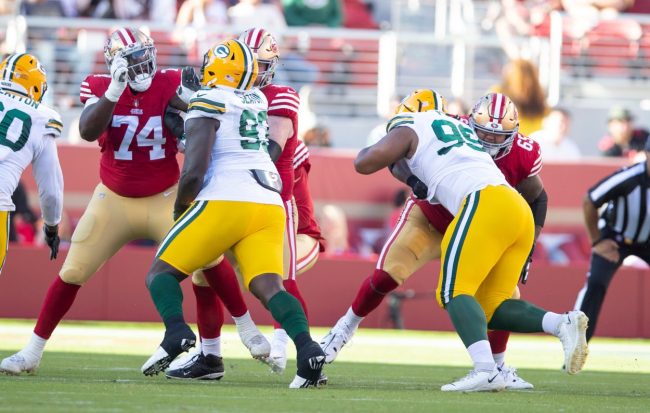 The San Francisco 49ers didn’t have a first-round pick in the 2022 NFL Draft. Instead, the would-be No. 29 overall pick ended up in the hands of New England Patriots by way of the Miami Dolphins and Kansas City Chiefs.

That pick was involved in a pair of blockbuster deals. First for Trey Lance, then Tyreek Hill before a draft-night trade New England and Kansas City.

But not picking in the first round doesn’t seem to have kept the Niners from acquiring talent. In total, San Francisco made nine picks. Though one pick in particularly is reportedly standing head and shoulders above the rest.

NFL Insider Jordan Schultz recently spoke to a source within in the organization who gave a glowing review of rookie right guard Spencer Burford.

Burford was a fourth-round pick, No. 134 overall, out of UTSA. He was an first-team All-Conference USA selection in 2021 before impressing at left tackle in the Senior Bowl. He’s now moved inside for San Francisco and appears to be well ahead of schedule.

Maybe the best part: “Trey [Lance] has total trust in him.”

Schultz then noted that San Francisco starting QB Trey Lance, who has impressed in his own right this offseason, “has total trust” in Burford.

Only the GOAT could get away with this. https://t.co/Gf1S4YAUxP

Despite a bevy of training camp fights, the news out of San Francisco continues to be good for the Niners. DraftKings Sportsbook currently list them as seventh-favorites to win Super Bowl 57 at +1600.