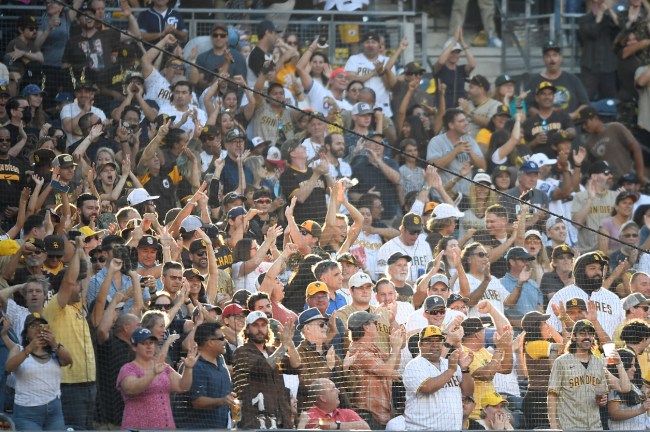 The Colorado Rockies and Milwaukee Brewers are a couple of teams to reveal their City Connect uniforms, and both fanbases had mixed reactions when they dropped the news.

On Friday, the San Diego Padres got into the game of City Connect uniforms. While the jerseys leaked on Wednesday, the ballclub announced the official reveal in a brilliant video.

Fernando Tatis Jr., Manny Machado, and Joe Musgrove walking out at the beginning of this clip is terrific. More than that, the jerseys San Diego is going to sport are definitely unique.

Here’s a full shot of the jerseys, followed by a video of the team store ready to sell a ton of these jerseys.

What do you think, #Padres fans? pic.twitter.com/u93lNTqyJr

Padres Fans Are In Love With These New City Connect Uniforms

When the initial leak dropped, there were mixed reactions. However, that was just the jersey. The teal-colored hat is something different, and the alternate-colored sleeves are also a perfect touch.

The Padres went with a binational theme in their City Connect series, using vibrant colors that pay homage to the Hispanic culture of a city so close to the US-Mexico border. They think their young fans will like them.

These new uniforms got quite the reaction from Padres fans.

.@padres The #cityconnect jersey, the video, our guys…all of it is complete 🔥🔥🔥! Best in #MLB! Proud of our city and our team! Let’s go! #padres #TimeToShine https://t.co/h5YNatRtpU

Alright these are pretty sweet. The hype video sealed the deal for me. https://t.co/SmhT6k5ZXa

I hate how much I love it https://t.co/4ELYdn2NyA

The uniforms are terrific, and this video the Padres released has to be the best City Connect reveal of them all. Soon enough we will see the Padres rock these uniforms on the field.