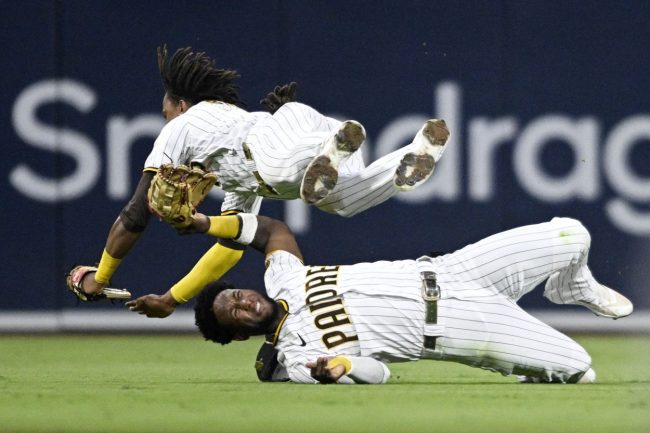 Profar, who has played in almost every game for San Diego in 2022, is having his best season since 2019 with the Oakland Athletics. The versatile defender has played a number of positions across the diamond for the Padres and is showing pop at the plate. He’s got eight home runs and 38 RBI in 82 games play. That puts him on track for one of his career-best seasons at the dish.

During the fifth inning of San Diego’s game against the San Francisco Giants, Profar ran in from left field to try catch a pop fly off the bat of Tommy La Stella. At the same time, Padres shortstop CJ Abrams raced out from his shifted position on the right side of the second base bag.

Abrams made the catch while sprinting at full speed, but at the same time, Profar was sliding to do the same. That led to a scary collision.

A dangerous collision between CJ Abrams and Jurickson Profar in the outfield after CJ made an insane play.

Profar was taken out of the game due to possible injuries 🙏

Profar originally got up and walked off under his own powers next to San Diego trainers, but he then collapsed before reaching the dugout.

Super scary moments in San Diego right now. After CJ Abrams and Jurickson Profar collided while going for a ball, Profar seemingly got up to walk off, then collapses. pic.twitter.com/YwaNToZs3X

He was then carted off the field, giving the fans a thumbs up during the process.

Jurickson Profar was carted off the field after a scary collision with CJ Abrams.

The Padres' outfielder attempted to walk off under his own power but collapsed to the ground before being placed on a stretcher 🙏 pic.twitter.com/D0F4ozl8ck

Fans of both teams and across the league were immediately wishing the best for the Padres player.

Sending so many prayers to Profar and his family 🙏🏻

Prayers up for Profar and his family. Bigger than baseball, that’s a husband and a father out there hurting. KYAL

Wishing the best for Profar but how are NONE of the staff next to or holding onto him after that hit? https://t.co/zJRNzTA6tb

No update on his status was available at the time of writing. The Padres led the game 1-0 at the time in the top of the fifth inning.