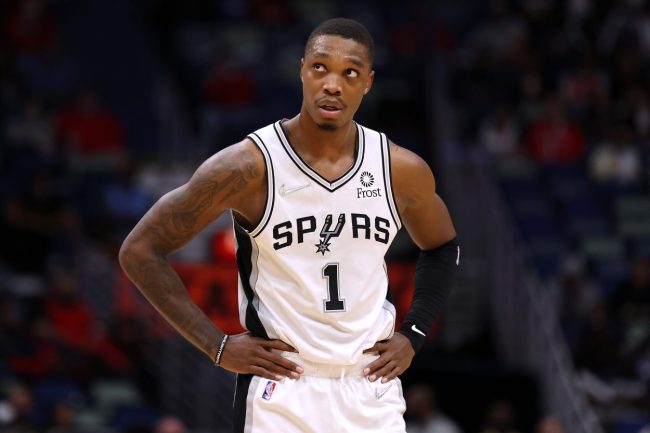 The San Antonio Spurs are going to look much, much different when the 2022-23 NBA season starts.

San Antonio made headlines on Wednesday when it traded rising star point guard Dejounte Murray to the Atlanta Hawks for veteran forward Danilo Gallinari and a slew of draft picks.

They’ve since waved Gallinari, making him a free agent.

Walker has been solid, if unspectacular, since San Antonio drafted him with the No. 18 pick in the 2018 NBA Draft. This past year he averaged a career-high 12.1 points per game off the bench, but shot just 31.4 percent from deep, the lowest of his career.

San Antonio now opens up even more cap space and gives itself more flexibility as the Spurs appear headed for a rebuild But fans weren’t sure how to feel about the move.

Some felt Walker could still blossom into a useful NBA player.

Lonnie Walker is gonna sign somewhere else and end up having the best year of his career so far lol https://t.co/cA3PWu2jDo

It was fun Lonnie.

If he can tighten up his mentals of the game, he can be a force off the bench for a lot of teams. https://t.co/IGuLKsGMll

But others weren’t quite as heartbroken.

Moving from Lonnie Walker was the best thing for the Spurs. Lonnnie is gonna be a great role player in the nba but never an allstar of superstar. He’s not consistent and doesn’t have that dog in him.

Walker’s market is unclear. He’s still just 23 years old and has the type of length and athleticism and general manages across the league covet. But he’s not progress the way the Spurs had hoped and could just as easily be out of the league in a few years.

Either way, Spurs fans appear to be in for some new horizons in the coming years.