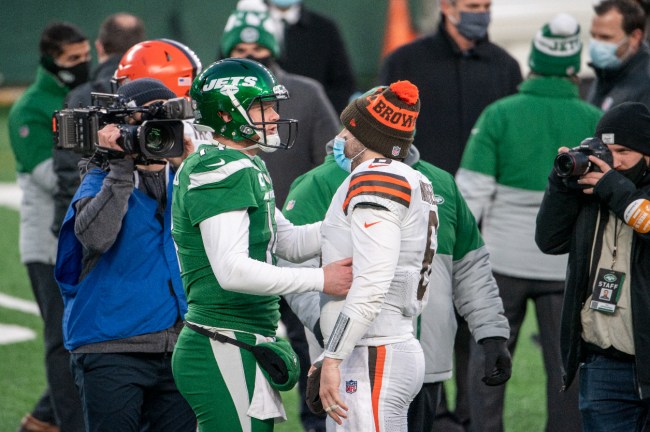 The Carolina Panthers finally acquired Baker Mayfield from the Cleveland Browns after months and months of drama and trade speculation. With Mayfield coming to town, all signs point to him being the Week 1 starting quarterback.

Sure, reports have circulated that there will be a QB competition, but that shouldn’t be a problem for Mayfield with Sam Darnold and Matt Corral behind him. However, Darnold recently spoke about this QB battle, and his comments are a bit surprising (h/t Kevin Patra of NFL.com).

“It’s always fun to compete and to be able to have someone to compete with. At the same time, in our eyes, we’re both the starting quarterback for this team right now, and that’s how we’re going to view it.”

This is, once again, an interesting anecdote from Darnold. The former USC Trojans star was ready to take the job earlier this offseason, but the Mayfield trade changed that quickly.

Even with the QB competition, Darnold and Mayfield are good with each other.

All seems fine for now, but Darnold might not want to get his hopes up of taking the starting job. The Panthers acquired Mayfield for a reason, and while neither QB is spectacular, there is no doubt that Mayfield is an upgrade over Darnold.

Then again, who knows what Matt Rhule decides to do. After all, he did bring back Cam Newton last year.