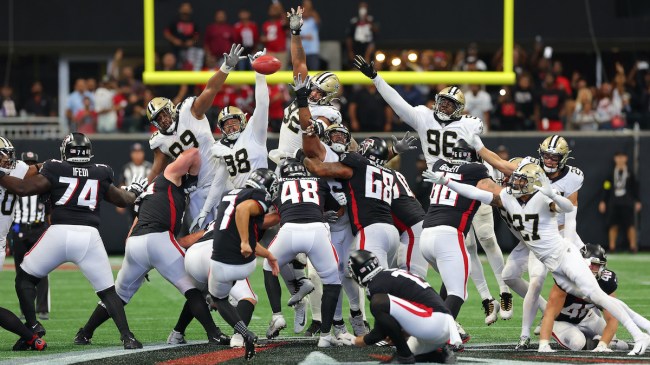 It might be a new NFL season, but the Atlanta Falcons haven’t changed one bit as they blew yet another lead at home.

The Falcons were off to a promising start in their season opener against the New Orleans Saints. Marcus Mariota led them to a 26-10 lead early in the 4th quarter and all signs pointed towards a 1-0 start to the season. Then, in the most Atlanta Falcons way possible, disaster struck.

Jameis Winston evaporated the Falcons’ lead by connecting with Michael Thomas twice in the endzone and Will Lutz followed with a go-ahead field goal. With 19 seconds left on the clock, the Falcons still had a chance to salvage their 4th quarter meltdown though.

Mariota marched his team down the field, but Younghoe Koo’s 63-yard field goal attempt was blocked as time expired and the Falcons’ fate was sealed.

The Saints already trolled the Falcons with 28.3x faster escalators before the season started and the jabs continued following their win.

It appears the Saints are becoming quite comfortable playing at Mercedes-Benz Stadium in Atlanta, Georgia. Sunday’s comeback win marked their 5th consecutive away victory over their NFC South competitors.

The Saints posted a graphic on Twitter highlighting their previous scorelines in Atlanta with a caption that reads, “When the Visitor becomes the landlord.”

When the Visitor becomes the landlord. pic.twitter.com/LL514AGduO

They weren’t the only ones gaining satisfaction out of the Falcons blowing another 4th quarter lead though. Fans haven’t forgotten about the historic collapse in Super Bowl LI against the New England Patriots and Sunday’s game felt eerily similar.

The Falcons had a massive 97.6% win probability when going into the 4th quarter. Clearly, the algorithms have yet to factor in the Falcons’ reputation for choking.

It’s a new season, but it’s the same exact Atlanta Falcons. With another blown lead in the books, Falcons fans are starting to lose hope.

One fan even suggested it was time for the team to pick up a new sport because “football clearly isn’t their thing.”

Of course, it’s only Week 1 so it’s okay to take the performance with a grain of salt. But given the Falcons’ pattern of choking, their fans have good reason to be concerned.

A friendly reminder that you should never overreact to what happens in Week 1 … the results are almost always misleading.

Unless you're a Falcons fan. This is your life now and you should just accept it.

Sunday wasn’t all bad for the Falcons though. Their performance in the first three quarters was pretty impressive. It’s too bad fans will only remember what happened in the 4th quarter.

Never ask the Falcons for change for $1. They’ll only give you 3 quarters

It’s a tough start to the season for the Atlanta Falcons and it doesn’t get any easier. They travel to So-Fi Stadium in Week 2 to face the Los Angeles Rams.

If this lead-blowing trend continues, Falcons fans are in for another long season. Although, it’ll make for some exciting 4th quarter comebacks for whoever they’re playing.