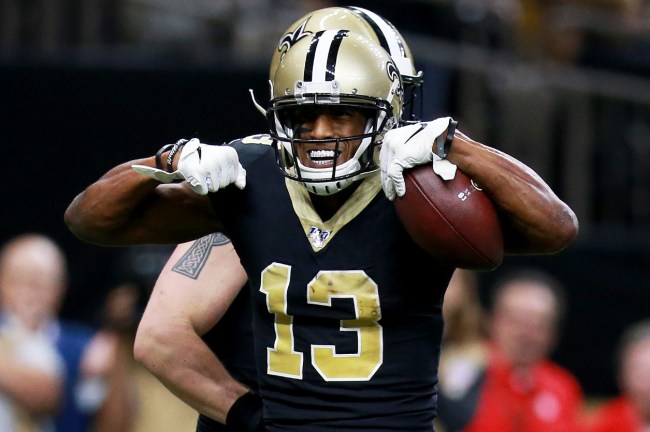 The New Orleans Saints have been waiting a long time for Michael Thomas to get back fully healthy. Well, the time might be coming very soon.

Recent reports suggested that Thomas is ready to go for the 2022 season. That is terrific news, especially with the Saints facing an uphill battle in the NFC South.

Now, ESPN reporter Mike Tripplett dropped another nugget on Michael Thomas, and Saints fans are loving every bit of this.

Saints WR Michael Thomas keeps one-upping himself with each practice this week. A fantastic back-shoulder TD catch in 1-on-1 drills against tight coverage from CB Paulson Adebo. His physicality has been evident throughout camp.

It’s been a long road for Thomas to get back into game shape, but this is encouraging.

I need apologies for MT 👀 https://t.co/lDFg2vvWkT

Would it honestly surprise anybody if Michael Thomas leads the NFL in receptions this year? @Cantguardmike #Saints https://t.co/sWeACMRZmd

Me seeing all these Michael Thomas updates pic.twitter.com/jogzHTAc7k

Thomas is sure catching fire at training camp, and Wednesday’s practice was a success for him, according to a flurry of reports.

Michael Thomas in the past 10 minutes….
4 receptions, 4 TDs

Michael Thomas is dominating the 7 on 7 period

Mike Thomas just went up in the air, caught a pass on Roby, and got his toes down before being pushed out of bounds.

I don’t want to say he’s back, but he’s doing the kind of things a guy who is back would do.

Thomas has been looking sharp thus far, and if he can stay healthy, he has a clear path to return to a top wide receiver in the NFL.

But, he was electric in 2019, catching 149 passes for 1,725 yards and nine scores. If he can even get close to those numbers, the Saints could make some noise in 2022. Prepare yourselves; Michael Thomas’s return is near, and things could get interesting.