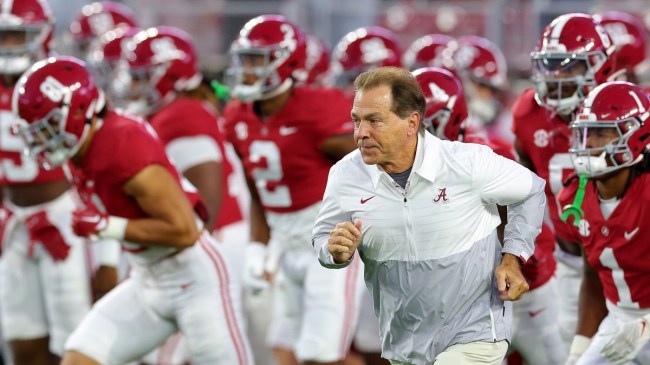 There aren’t many people on the planet that know more about football than Nick Saban. The Alabama head coach is in his 50th season in coaching after his college career at Kent State. And, the seven-time national champion has seen a lot of changes into the way football is played.

Looking at offenses from the 1970s compared to now makes football look like a completely different sport. Even though a lot of the main concepts, especially in the run game, are similar, the thing that has changed the most is how teams line up. There are so many more formations now, and teams seem to utilize every inch of the field horizontally.
And, after Alabama’s 52-49 loss to Tennessee Saturday, Saban went on a weekly media appearance with a wild anecdote about how much football has changed.

It’s no secret that the Crimson Tide struggled with the Volunteer offense. After all, The Vols wracked up 567 yards of offense against Alabama. Tennessee runs some interesting stuff on offense with some interesting alignments. For example, their wide receivers line up nearly all the way to the sideline, which makes the defense defend a ton of space.

But, it was a formation that everybody knows that some of the Tide defenders had no clue how to line up against, according to Saban.

Nick Saban discusses how much college football has changed when it comes to offense, which he said is for the good.

Yes, his players did not know what to do against a traditional I formation. In today’s game, this formation, which was the base formation in the sport 20 years ago, has become incredibly rare at any level of football. Even most running teams in high school now usually use a spread look to run out of or a pure option look.

Thankfully, for the Tide, their season won’t come down to being able to stop the I formation.