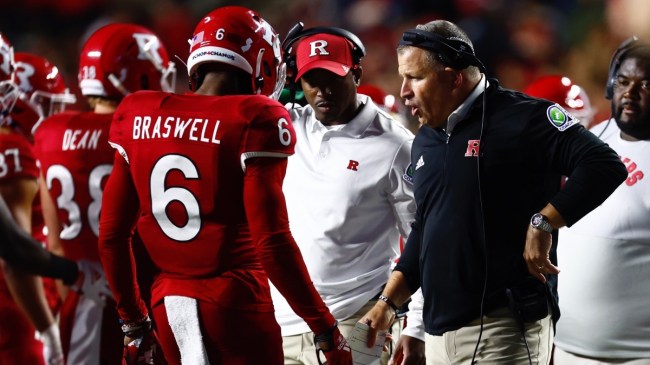 Rutgers football has been the butt of many jokes. After all, it’s downright hilarious that a program located in a fertile recruiting bed and so close to New York City can’t get it done. They are routinely in the bottom of the Big Ten. They’ve brought back Greg Schiano, the coach who brought the Scarlet Knights to new heights in the early 2000s.

Rutgers even got off to a good start this year. They started 3-0 with a win over Boston College, and had a chance to make a statement when they hosted Iowa in week 4. But, in typical Rutgers fashion, they laid an egg in front of a sellout crowd and lost 27-10. They are set to travel to #3 Ohio State this weekend and most think it’s a blowout coming. But, Coach Greg Schiano has other ideas.

Schiano says his Rutgers team is going to win.

Ohio State comes in as a 40.5-point favorite, but that doesn’t deter the head coach.

Greg Schiano on the #OSU matchup….

I have news for Schiano. You are not going to win that game. the Buckeyes, led by Heisman candidate CJ Stroud and weapons like Marvin Harrison Jr., Jaxson Smith-Njigba, and Cade Stover, is going to go up and down the field against the Scarlet Knight defense. And, the Rutgers offense is terrible and I see no way they score consistently enough.

Of course, there were a ton of fan reactions to his statement.

Some Rutgers fans are loving the optimism. After all, what do you have to lose?

But, some fans think it just has no credibility and there are important things they can get out of the game.

This is dumb. It would be better to use the game as a scrimmage and try to get better at specific measurable tasks, get younger guys quality minutes, etc.. Even talking about winning makes the team look ridiculous.

I think Schiano will look pretty foolish come Saturday, but I guess that is why they play the game.