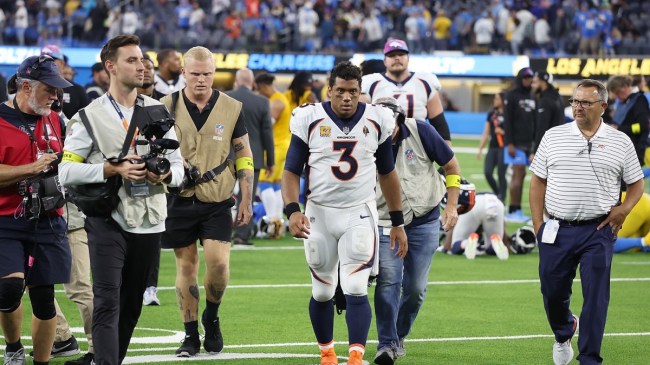 Russell Wilson was supposed to solve all of Denver’s quarterback woes. The Broncos have struggled to develop a quarterback of its own since John Elway was young. Former first-rounder Paxton Lynch didn’t work out, nor did Drew Lock. And, with a talented roster, Denver made their move in the offseason when they acquired the Super Bowl Champion Russell Wilson from Seattle. Not only that, but they signed him to a $245 million contract

But, Wilson has been subpar for a terrible Broncos offense this year. And, in Monday night’s game against the Los Angeles Chargers, it was more of the same for Wilson and his unit.

Wilson actually started out quite well, and he was 10/11 at one point with a touchdown pass. But, the wheels came off.

This is not good.

Russell Wilson since the 1st quarter:

Wilson’s struggles are magnified when you realize this is the fourth primetime game the Broncos have played in six weeks. How is that even possible?

And, they’ve been the worst offense in football! They’re so painful to watch. It’s just check down after check down. Nothing good happens down the field and they’re struggling to run the ball.

The #Broncos gave Russell Wilson a $245 million contract to lock him up for 7 years and they're ranked dead last in points per game in the NFL.

They also scarified their future by giving away two 1st round picks, two 2nd round picks and 3 players.

And, the defense has been stellar. They’ve only allowed six touchdowns through six games. That’s incredible. Yet, despite investing $245 million in a quarterback, they’re 2-4. Eventually, that defense is going to quit on the offense. who could blame them, given how poorly the offense has played.

Denver hosts the red-hot New York Jets next week in what is likely a must-win game for their season.