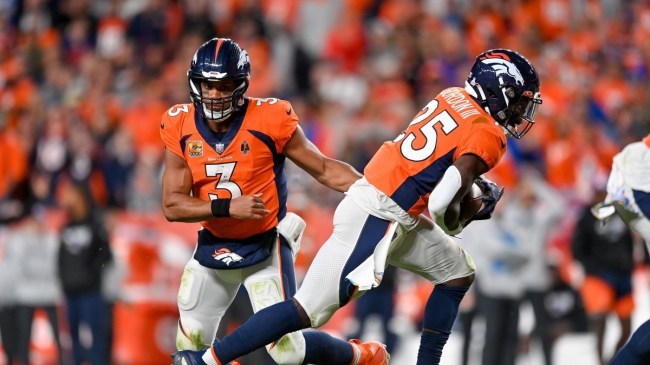 It’s been a very poor start for The Denver Broncos offense. The unit added Russell Wilson as the quarterback this offseason. And, they had a receiving corps that people thought highly of that included Jerry Jeudy, Tim Patrick, and Courtland Sutton.

But, they’ve been downright terrible. They’re second-to-last in scoring offense at just 15 points per game through 5 games and they find themselves at 2-3. Wilson himself has been atrocious. He’s completing only 59% of his passes and has only 1250 yards and 4 touchdowns to 3 interceptions through five games. Noticeably, his arm strength has looked to be really bad, and frankly, he looks washed up. But, we now know there may be a reason for it.

Russell Wilson has a torn lat in his right shoulder

This could explain a lot of the issues with the Denver Broncos offense.

Broncos’ QB Russell Wilson played Thursday night against the Colts, and three quarters of the previous game against the Raiders, while battling a partially torn lat near his right shoulder, according to sources.https://t.co/HBBoet8LX5

This is an excerpt from Adam Schefter’s ESPN article.

Denver Broncos quarterback Russell Wilson played Thursday night against the Colts, and three-quarters of the previous game against the Raiders, while battling a partially torn lat near his right shoulder, according to sources.

Wilson suffered the injury in the beginning of the second quarter of the loss to Las Vegas during a game in which he threw two touchdowns and ran for another.

Doctors diagnosed the injury in the days leading up to the Colts game. Wilson did not practice until Wednesday, one day before Denver hosted Indianapolis. He was listed on the injury report as questionable with a shoulder strain.

Is this why Russ looks like he has no arm strength? It most likely is.

Schefter went on to say that it’s not expected that he will need surgery, but the quarterback may not be 100% for a while.

Denver next plays in week 6 against the Chargers on Monday Night Football. With the Broncos having played on Thursday in week five in their 12-9 overtime loss to the Colts, Wilson will have a ton of rest.