Russell Wilson Had More Corny Quotes After Yet Another Broncos Loss 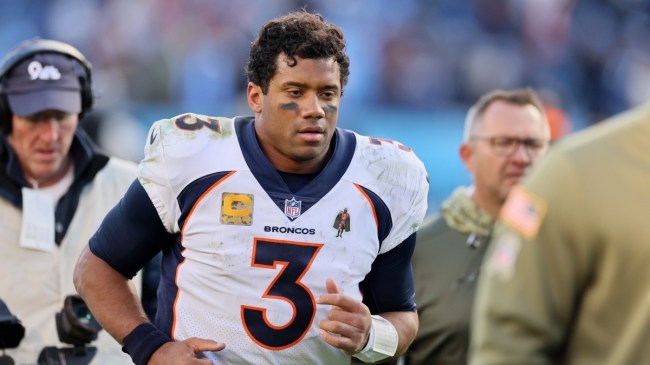 Russell Wilson is undoubtedly one of the corniest players in the league. His corny quotes are the stuff of legends. They usually sound like an AI bot programmed to produce quotes you’d hear in a low-budget Disney Channel movie. And recently, he went viral for saying he was doing calisthenics on a flight to London. What a dork.

But, those quotes haven’t been working for his team. After an offseason trade to the Denver Broncos, the team was considered a definite playoff team and maybe a Super Bowl contender by many. But, they’ve played terribly and Wilson is to blame. The offense has been horrific, and first-year head coach Nathaniel Hackett is on the brink of getting fired seemingly after every loss.

Somehow, they were still 3-5 despite the atrocious play and had a chance to get to 4-5 against the Tennessee Titans. But, another poor performance by the offense doomed them.

The Tennessee Titans were ripe for the picking on Sunday. Denver’s defense shut down Derrick Henry through the ground, holding him to just 53 yards on 19 carries. And, no one is confusing Tennessee’s passing attack for the Greatest Show On Turf.

But, Denver’s offense was terrible once again. Wilson was 21-42 for 286 yards with one touchdown and one interception. That was good for a QBR of 22.4/100. In other words, not good enough. The only touchdown came on a 66-yard touchdown to Jalen Virgil. They simply could not sustain drives all day.

After the game, all he could muster was another corny quote.

And, people had jokes.

Doing high knees down that tunnel

The Broncos will play the Raiders next week. The good news for both of these terrible teams is that it’s likely one of them gets a win.