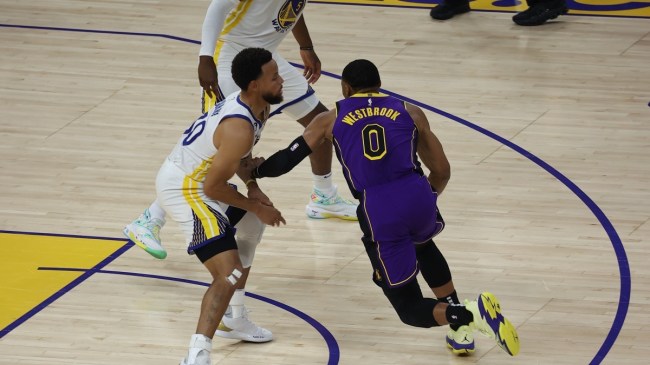 It’s been an illustrious career for Russell Westbrook. The former MVP and nine-time all-NBA players is a sure thing to go to the Hall Of Fame when his career concludes. So many great highlights are of his doing in the last fifteen years or so, and his combination of athleticism and skill is nearly unmatched.

But, father time always wins and he is no longer the superstar he once was. The current Laker is a shell of his former self and in Thursday’s game against the Clippers he had one of the worst games in recent memory and almost certainly the worst of his illustrious career.

Westbrook was absolutely terrible for the Lakers

Here’s the stat line, in all its glory.

Yikes. That’s really bad. He’s never been the most efficient player, but that is just downright awful. Somehow, Russ said he played “solid”. I now want to know how bad he would have to play to call it a bad game.

Reporter: "How would you assess your game tonight?"

Though, from the looks of it, he wasn’t doing much better in warmups either.

Russell westbrook building a house in the back. pic.twitter.com/wlFdJtBxan

Los Angeles Fans Want Him Off The Team

Naturally, fans of the prestigious franchise are not going to take kindly to that level of poor play.

Your family needs you, the Lakers don’t. @russwest44

It's still hard to believe Russell Westbrook is on this team. Inexcusable.

The Lakers are now 0-2 on the season after their loss to the Clippers.