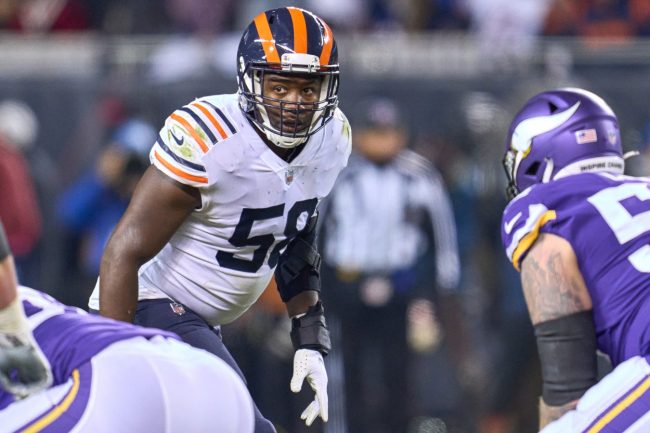 Life as a Chicago Bears fan is pretty difficult these days. Justin Fields, the team’s first-round draft pick in 2021, struggled mightily in his rookie season. The team let star wide receiver Allen Robinson walk to the LA Rams in free agency. Their new orange jerseys are an absolute abomination, and the team is doing everything it can to leave the city.

The good news, however, is that things can’t possibly get any worse after Chicago went just 6-11 in 2021. Right?

Wrong. Not only did the Bears not have a first-round pick in the 2022 NFL Draft after trading it away for Fields. Now it appears Chicago is going to lose its best player.

Two-time All-Pro linebacker Roquan Smith, whom the team selected with the No. 8 pick in the 2018 NFL Draft, dropped a bomb on the organization with a trade request on Tuesday morning.

“Unfortunately, the new front office regime doesn’t value me here. They’ve refused to negotiate in good faith, every step of this journey has been ‘take it or leave it.’ The deal sent to me is one that would be bad for myself, and for the entire LB market if I signed it. I’ve been trying to get something done that’s fair since April, but their focus has been on trying to take advantage of me.”

Smith’s rookie contract expires following the 2022 season. He has 524 tackles, 14 sacks and five interceptions in his first four seasons in the league. Bears fans made themselves loud and clear on the matter.

@ChicagoBears you continue to be a complete embarrassment to the great fans and players you have! Not signing Roquan is the final straw. #boycottdabears #boycottmccaskeys #firepoles #payroquan

Ffs @ChicagoBears What are you playing at. #PayRoquan

Ryan Poles may be fired next offseason. https://t.co/0PJmmUPbM4

If Smith hits the open market, there will likely be no shortage of suitors. Smith’s 524 tackles and 348 solo tackles are among the best in the NFL all-time for a player in their first four seasons.

Deebo is back with the #49ers and he's got a plan to take them to the Super Bowl.https://t.co/T8X6yxhzEk

DraftKings currently sets the Bears’ over/under for wins at 6.5. That number looks set to drop if they trade away one of the league’s best defensive players.