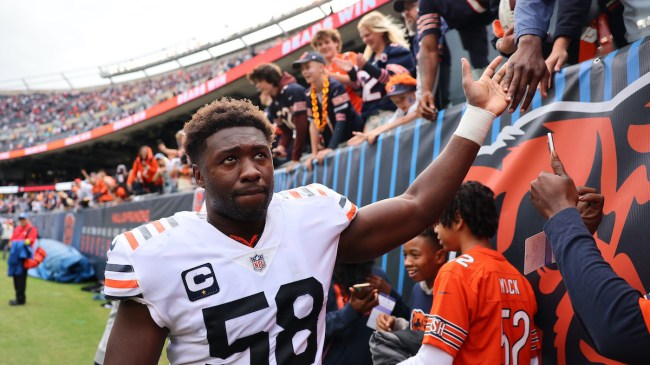 The football world saw a major move go down between the Philadelphia Eagles and Chicago Bears on Wednesday ahead of the Nov. 1st trade deadline.

Somehow the NFL’s last remaining undefeated team improved its defense by acquiring Pro Bowl pass rusher Robert Quinn in exchange for a 4th round pick. The report came as a surprise for most with the Eagles coming off their bye week.

However, it was Bears’ Roquan Smith who definitely took the news the hardest. The star linebacker fought back tears in an emotional reaction after learning about the trade during the middle of his press conference.

Roquan Smith learned of the Robert Quinn trade while speaking to the media. He was emotional about it and had to leave the podium. pic.twitter.com/hiKjyn0HxJ

“Yeah, man. Sucks,” Smith said. “I have a great deal of respect for that guy. Man, crazy.”

It’s a heartbreaking scene with Smith taking several pauses to gather his emotions. Clearly, he has immense respect for the veteran defensive end. The pair had been teammates since Quinn joined the Bears in 2020 on a 5-year contract.

Unfortunately, football is a business and these tough goodbyes are commonplace in the sport. With the Bears struggling so far this season, even Smith could potentially be on the trading block.

The former first-round pick requested a trade at the beginning of the season and is set to hit free agency this off-season after contract negotiations fell through. Both are likely factors that would see him on the move by Nov. 1st.

Meanwhile, Quinn will aim to help the Eagles continue their undefeated season with a win over the Pittsburgh Steelers. After recording 18.5 sacks last season, he’ll hope to find that same efficiency on an already dangerous Philly defense.

The Bears and Smith will face the Dallas Cowboys on Sunday unless he’s also traded away first. Of course, the team actually has until Tuesday to make it happen if so they desire.