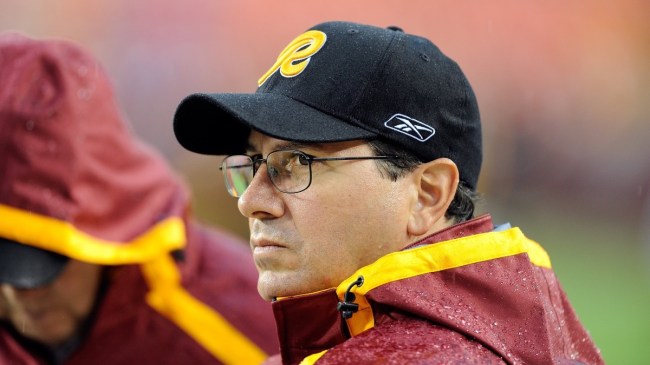 It’s more or less universally thought that Dan Snyder is not a good person. The owner of the Washington Commanders has been involved in multiple scandals recently. He is under investigation currently by the NFL for a team culture that had many instances of harassment. And, congress also deposed him over the summer after he refused to appear for an in-person hearing.

There’s more! On Thursday, it was reported that Snyder has been acquiring compromising information about other owners. This is because there could be a vote at the owner’s meaning next week to remove him as owner.

His attorneys deny the allegations as “categorically false.”

And, after Washington’s 12-7 win over the Bears on Thursday, Commanders coach Ron Rivera had a great chance to throw his owner under the bus.

Rivera was asked after the game about a report that said that it was Snyder’s idea to acquire Wentz from the Colts. But, he pushed back.

A fired up Ron Rivera on the report that Dan Snyder picked Carson Wentz: “It’s bullsh*t. I’m the fu**ing guy that pulled out the sheets of paper, looked at the analytics and watched the tape in freaking Indianapolis (at the Combine).”

That is quite the response. He had a chance to throw his embattled owner under the bus but didn’t take it. That’s certainly not the choice I would’ve made.

There have been other issues between Rivera and Wentz, and earlier in the week he said the reason they weren’t winning enough was the quarterback play.

The saga of the Washington Commanders is far from over. I’m sure whatever happens next won’t be pretty, either.

Can they get rid of dan snyder already