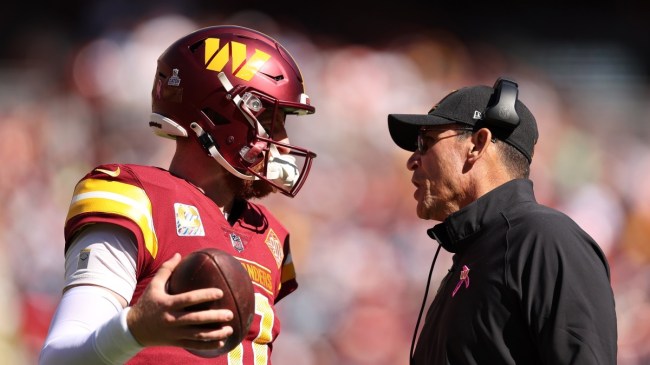 It’s been an inauspicious start to the season for the beleaguered Washington Commanders. They’re currently 1-4, and the offense has been putrid with Carson Wentz under center. For a franchise that is already under a ton of scrutiny. Dan Snyder is currently under investigation by the league and potentially congress for the culture of the team as well as potentially withholding ticket revenue.

And now, things are going to get even more heated due to recent comments by Head Coach Ron Rivera.

The NFC East is surprisingly pretty good this year so far. The Eagles are 5-0 and the Giants and Cowboys are both 4-1. With the Commanders already at 1-4, they’re looking at a pretty significant hole.

And, on Monday, Rivera was asked why he thought his team had fallen so far behind. He had a pretty simple answer.

I’m not sure I have ever seen an NFL coach throw his starting quarterback that far under the bus in my life. It’s such a drastic measure by Rivera.

Granted, Wentz has been putrid. He’s only completing 63% of his passes and he has already thrown six interceptions to just ten touchdowns. And, they rank 27th in scoring offense.

Wentz just has not been the same player since his 2nd year in the league. The former 2nd overall pick by the Eagles was probably the MVP favorite in 2017 before getting hurt late in the season. The Eagles went on to win the super bowl that year with Nick Foles under center.

Philadelphia shipped out Wentz last year to the Colts, where he famously choked down the stretch and the Colts missed the playoffs.

Somehow, Indianapolis fleeced Washington and got back a 2nd and 3rd rounder for the signal-caller. That is looking like quite a bad trade right now.

Washington will play Chicago on Thursday Night Football in a matchup of two of the worst quarterbacks in the league.