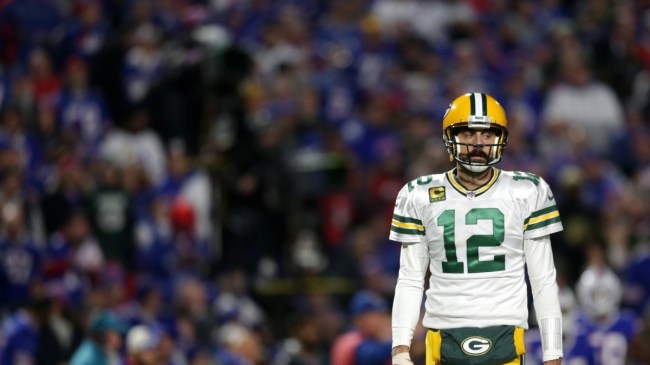 Aaron Rodgers has been at the top of his game in the two seasons prior to this one. The Packers’ quarterback won back-to-back MVP’s in 2020 and 2021, and was defying his advancing age every week. The arm talent was still all the way there, and he and Davante Adams were the best one-two passing game punch in the NFL. But, Adams was traded to the Raiders in the offseason, leaving the Green Bay receiving corps without a star. Montez Valdes-Scantling also moved on, going to the Kansas City Chiefs, leaving the corps very thin and inexperienced. The Packers bet on Rodgers’ superior talent making up for the lack of talent at receiver. It hasn’t worked out.

Rodgers finds himself outside the top ten in passing yards for the now 3-5 Packers, who lost to the Bills on Sunday Night Football, 27-17. The offense is simply not explosive at all. And,he’s having to rely on young receivers he doesn’t trust like rookies Romeo Doubs and Christian Watson, or old and washed-up veterans like Randall Cobb and Sammie Waktins. Rodgers, who was frustrated by the lack of investment into the skill positions by the franchise dating back years, is starting to get frustrated amid a four-game losing streak.

Those who watched Sunday night’s game, which was not as close as the 27-17 score indicates, noticed his frustration.

just having a good ole time on the sidelines pic.twitter.com/DGD9NR77kJ

Watching Rodgers get more and more frustrated is so beautiful.

And, the trade deadline is approaching, as it’s at 4PM ET on November 1. And, Odell Beckham Jr. is still on the free agent market. The Packers probably should make a move at receiver, but who knows if they will.

Then, in his postgame press conference, Rodgers was asked if opportunities to improve the receiving corps were on the table still. His response was contrite but said a lot at the same time.

“I think that’s a question for someone else in the organization,” Rodgers said.

Yikes. Clearly, he is frustrated with the lack of investment in his weapons, and how could you blame him?

Green Bay will travel to Detroit to take on the Lions next week in what is probably a must-win game for the team, as the Vikings are already 6-1.