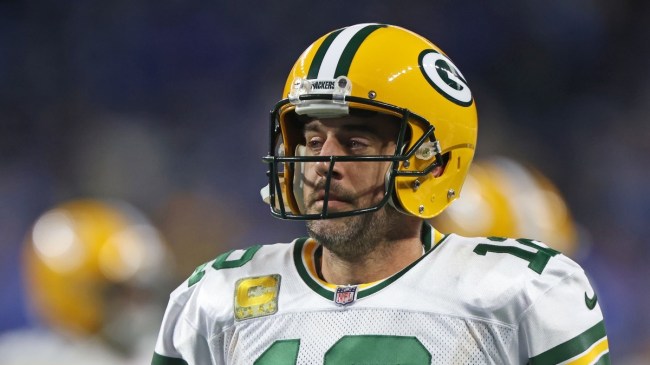 It’s wild to see a team quarterbacked by Aaron Rodgers play as poorly as the Green Bay Packers are right now. After an embarrassing 15-9 loss to the lowly Detroit Lions on Sunday in week 9, they sit at 3-6 and are losers of five straight.

Rodgers was horrific. He threw three interceptions including this throw, which will be among the worst of the entire season.

Aaron Rodgers with his second interception in the red zone today 😵‍💫 pic.twitter.com/FTk9sK3ite

It was just a brutal day. Yes, the weapons aren’t good. But, he’s not doing himself any favors with his own level of play. And, the team is simply not responding to him anymore. That is resulting in a lot of criticism coming his way.

Rodgers is getting blasted for bad body language and attitude

He’s been pouting around lately and acting like “woe is me”. People on the internet have had enough of his antics. This is the same guy who wouldn’t get vaccinated to help his team win, and doesn’t speak to his family anymore. It’s always been All About Aaron.

You can take a look at some of his pouting here.

People have noticed, and they’ve had enough.

Rodgers alternates between horrible body language and no emotion whatsoever. They both kinda suck but in different ways.

Aaron Rodgers is an absolute cancer. Matt LaFleur is in a no win situation with that guy. His teammates have to hate him. Worst body language I maybe have ever seen. Awful leader. Painful to watch. Sadly, he controls everyone, even the organization right now. Send him on his way

Rodgers body language always seems as if it’s someone else’s fault. You threw all that trash, bro.

I’d say Aaron Rodgers is washed but he doesn’t look like he takes a shower.

Aaron Rodgers is looking like the opposite of his hair: Washed.

I’d normally say he should go rely on his family for some guidance, but, that’s out of the question here.

Green Bay plays in week 10 against the Dallas Cowboys.