Robert Griffin III Gets Clowned For His Top 5 Quarterback List 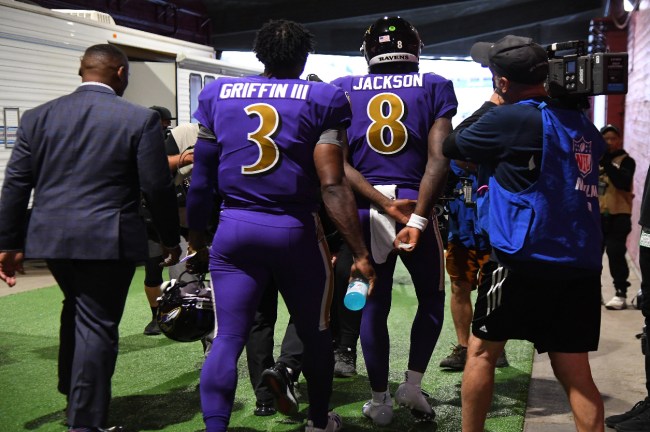 In today’s world, everybody wants to put out rankings and lists. ESPN got wrecked for their quarterback rankings recently.

Now, it is Robert Griffin III — who got a new job this week on Monday Night Football.

The former NFL signal-caller knows a thing or two about playing the position, but his list is questionable. Now #2-5 are fine, and they all arguably belong on the list, but #1 is a massive shock.

Here are the rankings from RG3. Oh, and this is his top-5 quarterbacks to start a franchise with.

Top 5 QBs to Start a Franchise With

Lamar Jackson is #1, per RG3. There is no doubt Jackson is a star, but better than Patrick Mahomes and Josh Allen? Let’s not forget they were teammates in Baltimore.

Obviously, these rankings didn’t go over well with most NFL fans.

In no way am I taking Lamar over the other 4. Lamar is on this list, but I’m taking Mahomes, Allen, Herbert, Burrow and Lamar in that order. https://t.co/gC7DICFRRc

Man must be getting 10% of Lamar’s next contract 🤣 using his job in the media to tell blatant lies https://t.co/6wFQLe7zTt

You can’t give me a reason why Lamar is #1 over Mahomes.

Why do you value Jackson more than his own team or the rest of the league? I got him maybe 10-13 range.

No bias. Just the guy at #1 who has carried his team the most.

Chiefs fans aren’t thrilled with this either. Jackson is a top-tier QB in the NFL, but Mahomes is Mahomes.

Patrick Mahomes is a better NFL QB than Lamar Jackson

All five of these QBs deserve to be on this list, but it’s tough to put Lamar ahead of Mahomes, considering their careers up to this point. Robert Griffin III might want to mute his mentions for a while.