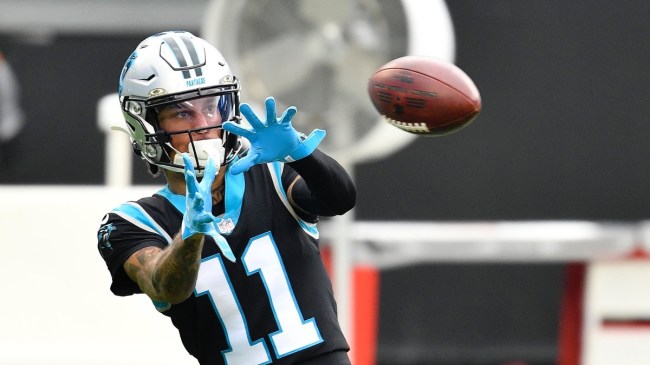 It has been a rough start to the season for the Carolina Panthers to say the least. They’re off to a disastrous 1-5 start and have already fired Matt Rhule. And, they’re shopping star running back Christian McCaffrey, Robbie Anderson and others.

But, the team keeps finding new lows. And on Sunday, it involved wide receiver Robbie Anderson and interim head coach Steve Wilks. It shows just how bad the culture is in Carolina.

It started when Anderson got in the face of wide receivers coach Joe Dailey.

Here’s the video of Robbie Anderson getting in the face of Joe Dailey. pic.twitter.com/TR9agsvaFr

Then, he got into it with Wilks.

Robbie Anderson has been sent to the locker room by his own team 😳pic.twitter.com/KqsKadRLv4

The meme world weeps at such discipline.

This is likely the end of the road for the wideout, who was already on the trade block. The Panthers signed him to a big contract just two seasons ago, but it didn’t work out. Now his trade value is nothing.

Robbie Anderson was a bad investment. Don’t fret over his trade value. Get whatever you can get it and move on.

Coming into Sunday, he had 13 catches for 206 yards and 1 touchdown. He can clearly still be productive. But, his attitude needs to significantly improve or else it’s not going to work for him anywhere.

The Pnathers will host the Tampa Bay Buccaneers next week. There, they will look to get back on track.