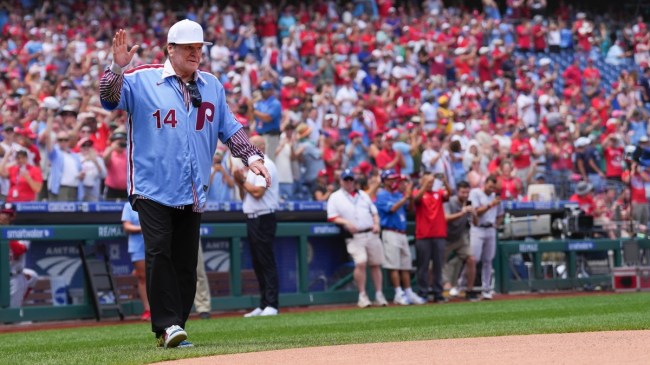 There may not be two more polarizing figures among baseball fans than MLB commissioner Rob Manfred and all-time hits leader Pete Rose.

Manfred is mostly derided by fans. Bud Selig’s successor is accused of not actually loving baseball by fans. He also is associated with unpopular rule changes like seven-inning doubleheaders and a free runner on 2nd base in extra innings.

He even got booed at Derek Jeter’s Hall Of Fame induction.

Come for the Derek Jeter intro. Stay for the Rob Manfred boos. Bronx Cheer made it to Cooperstown. #JeterHOF #HOF2021 pic.twitter.com/ZvRfSDjRq8

Rose is probably the most divisive figure in all of baseball and maybe in all of sports. The all-time hits leader was a model player. He played hard, he played fast, and he was productive. But, Rose was banned from baseball in 1989 after evidence of the star betting on games in which he managed came to light. With that, it made him ineligible for the Baseball Hall of Fame, according to the Hall of Fame.

Many want the ban lifted, saying that Rose has served his punishment and belongs in the Hall of Fame.

Here is what the commissioner had to say.

Rob Manfred on Pete Rose: "I believe that when you bet on baseball from Major League Baseball’s perspective, you belong on the permanently ineligible list." But he does not think that list is equivalent to the eligibility for the Hall of Fame. pic.twitter.com/NH9q2OmLVv

Those comments seem benign. But, him saying that he doesn’t think that the ban makes him ineligible for the Hall of Fame may change the game for Rose’s candidacy.

A lot of fans think he belongs in the Hall of Fame.

You can do amphetamines and everything else and get into the HOF, but just don’t gamble!!!

All time hits leader should be in the hall, period.

My bet (pun intended) is that he gets in, but only after he is dead.