Richard Jefferson Makes Good On Promise Made On ESPN Free Agent Special, Will Become A Ref, Sort Of 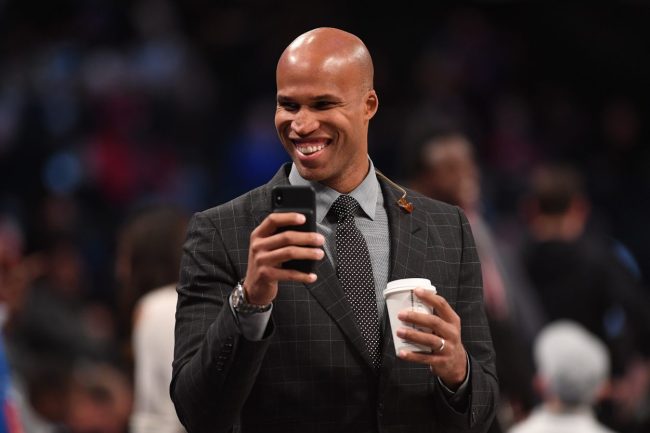 The NBA veteran and 2016 NBA champion had the following to say when faced with the possibility of Kevin Durant and Kyrie Irving both joining the Lakers:

“I will retire from this show if KD and Kyrie and Bron are in LA. I will retire…I’m gonna go referee.”

Brian Windhorst says it's been "floated" by executives that the Lakers "would potentially have a package" to trade for both Kevin Durant and Kyrie Irving.

Richard Jefferson couldn't handle it: "I will retire from this show if KD, and Kyrie, and Bron are in L.A." 🏀 pic.twitter.com/sEyHN0mUqf

As far as we know, Durant and Irving haven’t gone anywhere yet, especially not the Lakers. But Jefferson is going to become a referee. Well, sort of.

The NBA department of communications put out a tweet on Monday afternoon revealing that Refferson will officiate the second quarter of Monday’s NBA Summer League game between the New York Knicks and Portland Trailblazers. Jefferson has spent recent days attending officiating meetings. He’s also a 17-year veteran of the league. After officiating the quarter, Jefferson will join the halftime broadcast on ESPN2.

Most fans loved the idea and were immediately curious how Jefferson would fare with a whistle.

Awesome stuff. Did this at @Big12Conference Officiating Camp in 2005. It changed my complete perspective on officiating. Every game analyst should do this at some point. https://t.co/TLkuNabgrn

I like this better than the summer league rings lol https://t.co/zQhaLvdFuj

I love this. Richard Jefferson continues to shine as one of the best players-turned-media personalities out there. Him being a referee is going to be hilarious! https://t.co/ckFKSvodVg

Honestly, I guarantee as an ex player he will be better than many refs we could mention… https://t.co/kG5qeDjHKv

But some fans, in particular those of the Knicks, didn’t want Jefferson anywhere near the game.

Duece and Grimes already have 2 fouls. The hate is about to be rampant https://t.co/8ALDD3RjPe

If you ever needed more evidence that Adam Silver does not take officiating seriously, Richard Jefferson was just hired to officiate tonight’s Knicks game smh https://t.co/MTTY85adDr

Have a feeling Knicks summer league coach Dice Yoshimoto is picking up at least one “T” tonight in Vegas. https://t.co/UpSgOdnHVN

Others just made the extremely obvious joke.

Richard Refferson in the house

The move is sure to be a huge ratings boost for ESPN and the NBA. Jefferson is one of the network’s most gregarious personalities and is never afraid to speak his mind. Jefferson has recently dished on a number of topics. From shortening the NBA season to players skipping summer league, Jefferson has had his say. The NBA vet will no doubt have plenty to say after this experience as well.