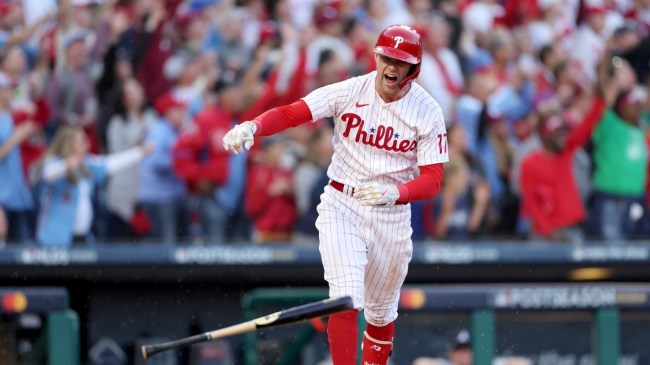 Everyone loves a good bat flip. Well, ok not everyone. Some boomers think it’s disrespectful to the game or something. But, amongst those who know how to work a smartphone, they’re beloved.

Playoff bat flips are especially fun. Jose Bautista’s bat flip in 2015 against the Texas Rangers comes to mind as one of the all-time best.

But, Phillies’ first baseman Rhys Hoskins just had one that is even better.

Rhys Hoskins found himself up to bat against Braves rookie Spencer Strider in the 3rd inning of a 1-0 game in game three of the NLDS (series tied 1-1).

What happened next will be forever in Phillies lore.

Rhys Hoskins with one of the most disrespectful pimp jobs ever @BarstoolPhilly pic.twitter.com/3DHULEMALH

The Hoskins bat spike was awesome. Incredible moment and emotion, with that crowd right there with him. 👏🔥

HOSKINS SPIKE ON THE ANNIVERSARY OF JOEY BATS' FLIP

IT IS THE BEST THING

BRYCE HARPER SENDS ONE TO JERSEY!

Fastball right down the direct middle of the plate to Bryce Harper? What could possibly go wrong?

Altogether, it was a six-run third inning for the Phillies.