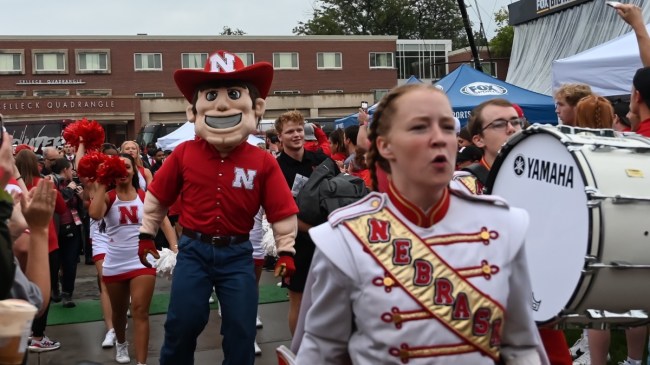 The Scott Frost era at Nebraska was quite the disaster. Frost, who was the quarterback on the 1997 national championship team, came home to Lincoln following a 13-0 season at UCF and looked like the perfect hire to turn Nebraska around. But, it failed, miserably, and Frost was fired after just three games in the 2022 season. he finished with a career record of 16-31 at Nebraska.

Naturally, names of potential replacements have been floated since the firing. Those names have ranged from Urban Meyer to Lance Leopold to Deion Sanders, and many more. But, according to recent reports, there’s one name that Nebraska loves and that same person wants the Nebraska job.

Aranda is one of the hottest names in football. And, according to this Baylor insider, he is primed to be the next head coach in Lincoln.

NEW: Sources according to @drakectoll say Nebraska is going to “give the kitchen sink” to make Baylor head coach Dave Aranda the next head coach of Nebraska.

“Dave’s going to say yes,” according to his source. pic.twitter.com/EGnQa2fDPy

Aranda was one of the best defensive coordinators in college football for over a decade. His defenses at places like Utah State, Wisconsin, and LSU had all been among the nation’s best. He was named head coach at Baylor heading into the 2020 season and after a 2-7 season in 2020, the Bears went 12-2 in 2021 and won the Big 12. He’s only 45 and is from Southern California. Southern California was an area where Nebraska got plenty of blue-chippers during the glory days of Tom Osborne.

He would bring instant credibility to a Nebraska program that desperately needs it. But, Frost was supposed to do that too and couldn’t get it done.

This Nebraska fan thinks people are underestimating the Nebraska brand. I think there is some truth to that, but I think many Husker fans are overrating how much the brand matters and just how fall it has fallen.

People underestimate the power of our brand just bc we haven't been good in a while. It's not just Baylor fans. Lots of schools should be nervous.

Here is the other side of the coin. I don’t think that it’s as dire for the Huskers as this person makes it seem. Plus, it’s not like there aren’t good coaches at lower levels. Kansas State’s Chris Klieman coached at North Dakota State before he got the Wildcat job. And, Kansas’s Lance Leipold was coaching at Divsion III Wisconsin-Whitewater less than 10 years ago.

It's going to be so funny when they wind up from some Dude at an FCS school. Husker fans r the ONLY people who don't realize NO ONE wants to go to Nebraska

Who knows if the Aranda rumors are true, but we know it will be a wild coaching search in Lincoln.