REPORT: Lakers Emerging As Most Legitimate Option For Kyrie Irving, But There’s A Concern For The Nets 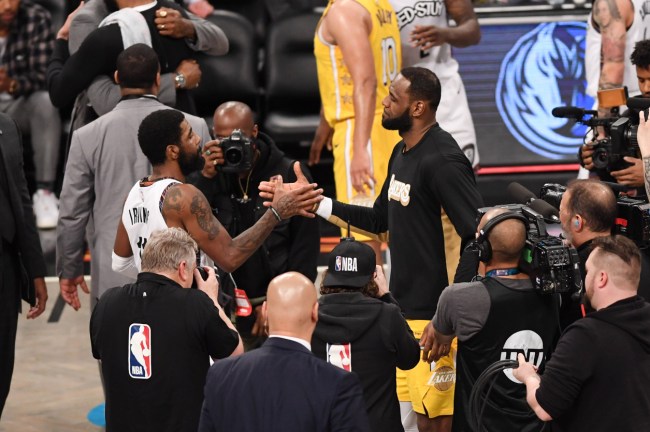 The Brooklyn Nets are going to look a lot different next season. Or so it seems.

The latest reports regarding Kyrie Irving state that he won’t return to Brooklyn next season, and that likely means that Kevin Durant won’t be back with the team either.

On a busy Monday, Adrian Wojnarowski of ESPN added another layer to the Irving chatter by acknowledging the Los Angeles Lakers as the most serious option of all the teams Irving would be interested in.

The Lakers, in theory, wouldn’t even need to trade for him if he does indeed opt out, although they wouldn’t be able to offer Irving that much cash.

If Irving declines his $36M player option, he would be eligible to sign with the Lakers for the $6M exception. Deadline is Wednesday to decide on option.

That’s good news for the Lakers, right? Well, not so fast.

Now, if Irving does opt-in, that would make things a bit more difficult for the Lakers. As Woj states in his first Tweet above, Brooklyn reportedly isn’t interested in the Lakers’ potential packages.

So, that would make it even more difficult for the Lakers to navigate a potential sign-and-trade, assuming Irving opts in to his option with the Nets. After all, why wouldn’t he?

And another wrinkle, there aren’t any other teams interested in a potential sign-and-trade for Irving. To sum it all up, if Irving opts in, then the Nets — as it stands right now — only have the Lakers as a serious option, and that would more than likely mean taking on Russell Westbrook or finding a third team to grab the Lakers point guard.

Get ready; NBA free agency will — once again — be a wild frenzy of activity.