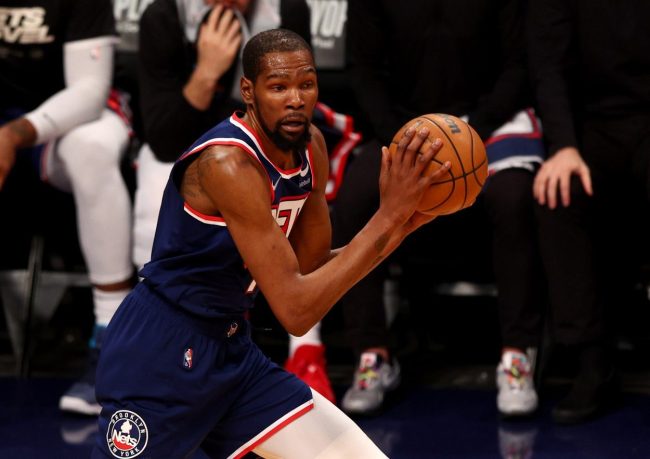 The NBA just got absolutely turned on its head.

And that’s before free agency even begins at 6 p.m. ET on Thursday night.

Twelve-time NBA All-Star and Brooklyn Nets superstar forward Kevin Durant has requested a trade, according to Shams Charania of The Athletic.

Kevin Durant has requested a trade out of Brooklyn, sources tell @TheAthletic @Stadium.

The Phoenix Suns and Miami Heat are Durant’s preferred destination according to Bleacher Report’s Jake Fischer and Yahoo’s Chris Haynes.

On Monday, as the league prepared for Kevin Durant to potentially request a trade during the Kyrie opt-in saga, Phoenix and Miami were often mentioned as the All-Star's perceived favorite landing spots.

The move comes just days after superstar point guard Kyrie Irving opted in to the final year of his max contract with the Nets. The prevailing feeling among fans was that that would ensure Durant stayed in Brooklyn as well. Though apparently that was not the case.

If Durant winds up in Phoenix, the return for the Nets could well include DeAndre Ayton. Ayton is a restricted free agent. Reports state the Suns will not match match any offer sheet he receives. Though he could be part of a sign-and-trade deal for Durant.

Suns brass reportedly will not match the offer sheet they are projecting Ayton to receive from other teams. pic.twitter.com/PvsgKFeRJ1

Durant’s request puts even more intrigue on Thursday night’s start to free agency. The feeling around the league is that teams appear hesitant to act on any free agents until Durant’s destination is set.