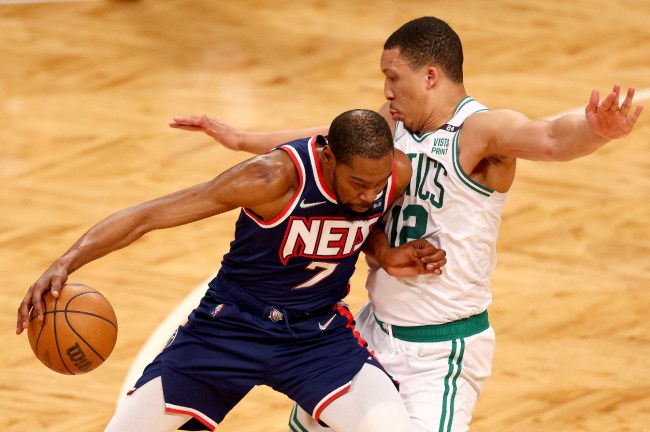 It’s 2:30 AM EST on a Monday at the end of July. Then, a Tweet comes from Adrian Wojnarowski of ESPN. No, it isn’t a Kyrie Irving or Kevin Durant trade.

However, it is a massive report and one that could shift the entire landscape of the NBA if it goes through. According to Woj, the Boston Celtics have emerged as a suitor for a Kevin Durant blockbuster deal.

As Brooklyn Nets star Kevin Durant’s trade request approaches a fourth week, the Boston Celtics have emerged among teams engaged in talks on a possible deal, sources told ESPN…The Celtics appear no closer to acquiring Durant than others in discussions with the Nets, but Boston’s ability to include All-Star forward Jaylen Brown as a centerpiece in offers does help to make the team formidable in its pursuit, sources said.

So, the Celtics, of all teams have come out as a potential suitor. Woj says they aren’t closer than the others at the moment, but things can change overnight.

Durant requested a trade nearly a month ago, and nothing has come to fruition yet. Can you imagine Kevin Durant joining Jayson Tatum on the Celtics? Boston also acquired Malcolm Brogdon from the Indiana Pacers this offseason.

Jaylen Brown figures to be the central piece in any Durant deal, and no, Tatum isn’t going anywhere.

Can you imagine the reception Brad Stevens will get if Durant puts on a Celtics uniform? The books changed quickly.

Updated favorites to start the season with Kevin Durant on their roster:

This is quite the Woj bomb. Let’s see if this ends up happening, and if it does, the Eastern Conference likely runs through Boston once again.