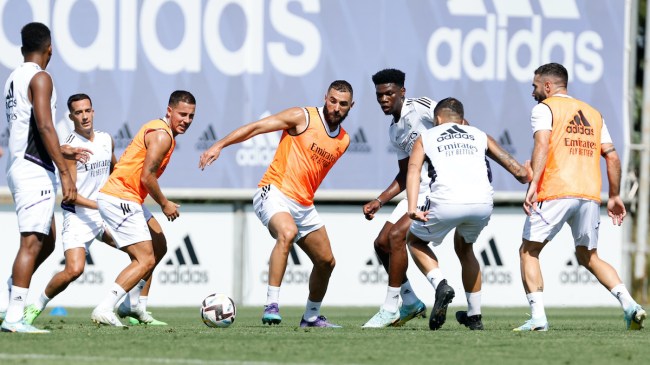 The sports world is always introducing new technology to improve the game and it’s no different in soccer.

The world’s most popular sport has already seen recent developments in Video Assistant Referee (VAR) and goal-line technology. Love it or hate it, a new dynamic has been brought to the game.

As the next step into the future, technology is making its way to the practice field. On Tuesday, Real Madrid CF showcased a new free-kick machine and it’s pretty unworldly.

Why use placeholders or real players in a wall when you can use this beast instead?

The new equipment simulates more realistic free-kick practice with six lifesize figures standing abreast and jumping together. Based on clips in the video, it appears the team can also reduce the total number of figures or adjust the height of individual figures.

With stuff like this, it’s no wonder the Spanish club is the reigning UEFA Champions League winner.

As impressive as the technology is, fans weren’t all convinced by its necessity. If realism is the goal, then surely actual players would be a better option. Of course, there probably aren’t many who’d be rushing to fill that position.

Or just use actual people? 😭

Other fans were confused as to why the team ditched the flat mannequins, but the answer couldn’t be simpler—they don’t jump.

Even as the next step in innovation, it seems the equipment hasn’t considered every possibility. Currently, it’s dangerously exposed to a cheeky shot underneath the wall.

Not up with the times, where’s the player lying down? Easy pass underneath the wall

Jokes aside, the new technology is likely to help improve Real Madrid’s free-kick conversion. Everything counts in the highest levels of competition.

Real Madrid is already extremely dangerous without set pieces. So it’s probably best if opponents avoid giving up free kicks to them for the foreseeable future.