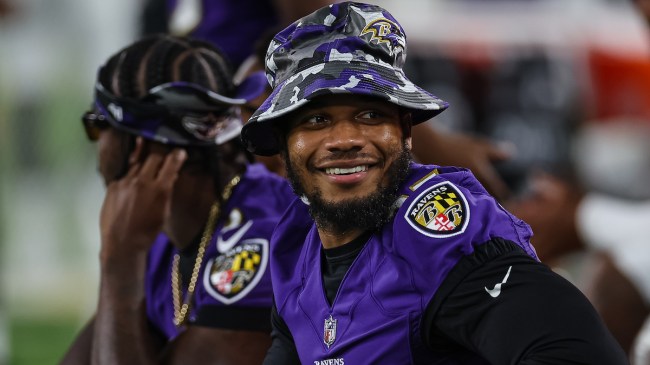 Baltimore Ravens running back JK Dobbins was injured during the 2021 preseason, sidelining him for the entire season. Now over a year later, his return to the gridiron is finally inching closer with Week 2 potentially in the cards.

Dobbins first revealed the timeline for his recovery by calling out NFL Network’s Ian Rapoport for incorrectly reporting that a Week 1 return was in doubt. However, it seems the Ravens are being careful about bringing the former Ohio State RB back too early and he did not play against the New York Jets.

On Tuesday, Dobbins sat down with WJZ-TV’s Mark Viviano and former Ravens WR Torrey Smith for his first interview since the injury. He shared how much his eventual return means along with revealing the true severity of his ACL tear.

In his 1st interview since injuring his knee, #Ravens RB @Jkdobbins22 explains to @MarkWJZ and @TorreySmithWR the extent of his knee injury and his eagerness to suit up on Sunday. More tonight at 11 and Saturday night from @JimmysSeafood only on @WJZ! #RavensFlock pic.twitter.com/nWY5Pid4hY

It turns out Dobbins didn’t just suffer a torn ACL, which is brutal enough. It was even more complicated with his LCL, hamstring, and meniscus all being impacted. So the Ravens’ caution in bringing him back has good reason.

JK Dobbins Hints At His Desire To Return For Week 2

Dobbins was also asked what a return this week (or the next) would mean to him. While Viviano remains vague on the exact timeline for the return, Dobbins doesn’t hesitate to specifically mention Week 2.

Some Ravens fans will hope that’s a sign Dobbins is fully recovered, but it’s likely more to do with the fact the Ravens play at home. Despite being drafted in 2020, he’s yet to play in front of a full stadium.

“Like I said, this injury has been tough. It wasn’t just a regular ACL. It was pretty bad, like it was ACL, LCL, hamstring, meniscus. So it was tough to get back to where I am right now. You know, it would mean the world to me if I can go out there this Sunday and play well in front of a full house because I haven’t done that yet.”

Dobbins’ rookie season in 2020 was impacted by COVID-19 and thus limited the number of fans in the crowd. Then he missed all of 2021 with the knee injury.

To finally play in front of a full stadium after two years and one grueling injury, there’s no doubt it’ll be a special moment for Dobbins.

Whether he’ll actually suit up against the Miami Dolphins on Sunday is still unclear. Luckily for Ravens fans, it appears his return will be sooner rather than later. Even Dobbins is pushing for that Week 2 return.

Kenyan Drake will serve as the Ravens’ lead back in the meantime. He only tallied 31 yards on 11 carries with a 15-yard reception against the Jets though. So the sooner Dobbins returns the better, as long as he’s fully healthy, of course.