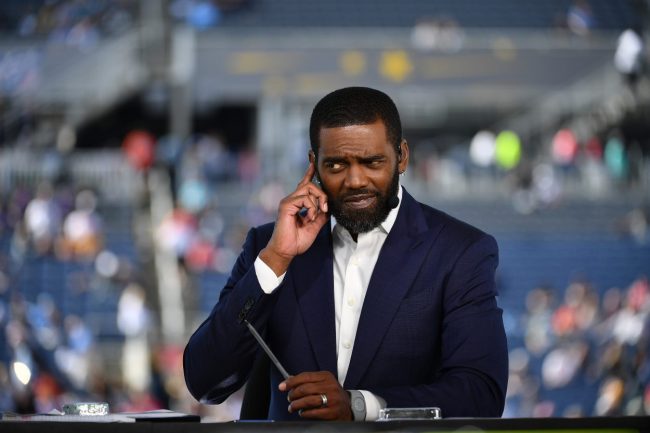 Randy Moss’ transition into the world of broadcasting is one of the most unexpected in recent history.

The much-maligned NFL wide receiver legend had a tepid, at best, relationship with media in his time in the league and was ostracized by many. But somehow, he’s turned that into an extremely successful post-football career.

The Pro Football Hall of Fame inductee began his TV run on Fox Sports 1’s Fox Football Daily show before transitioning to ESPN. He’s appeared on both Sunday NFL Countdown and Monday Night Countdown while at the mothership. But now that appears to be coming to an end.

Though some really liked the move. Griffin made the move to broadcasting following a once-promising NFL that was ravaged with injuries. The former Heisman Trophy winner agreed to a multi-year deal with ESPN in 2021 and has since been an analyst fro both the NFL and college football.

Really like this move by ESPN. No disrespect to Moss, I enjoy his input. I mean probably could have replaced someone else but man I enjoy @RGIII commentating. He brings a lot of knowledge and explains it really well to people and is always energetic. https://t.co/2ziLQw0Uos

Yessir, let's keep getting these former players in there. Good on Moss for letting somebody else get a chance too. https://t.co/9dA4fhsj30

Griffin’s post-playing career has been interesting, to say the least. He teased a tell-all book that never got released. Former teammates didn’t seem to love that.

He’s also still in great shape, and a return to the NFL isn’t entirely impossible.

This latest move appears to put an end to that. Fans should get used to seeing Griffin on their TV screens, because he’s a rising star behind the mic.