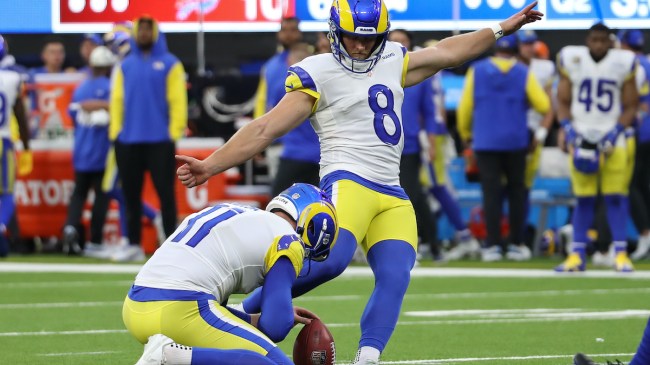 Players may not appreciate the NFL’s bizarre rules regarding uniforms, but at least the league is being consistent about it.

During the preseason this year, 49ers safety George Odum was handed a $5k fine for failing to cover up his knees. For a quick reminder, the NFL rules state “pants must be worn over the knee area; pants shortened or rolled up to meet the stockings above the knee are prohibited” (Rule 5, Section 4, Article 3, Item d).

It seems that rule has found its next victim only one week into the regular season. On Friday, Rams kicker Matt Gay tweeted out photos of himself showcasing “how to dress as a kicker in the @NFL per @nflcommish to avoid a $5k pant length fine.”

How to dress as a kicker in the @NFL per @nflcommish to avoid a $5k pant length fine. Thanks guys now I feel safe and can do my job super well 👍🏼 sorry my third pic I’m showing leg skin #fined @PatMcAfeeShow @BleacherReport @barstoolsports pic.twitter.com/844tSnbqoE

It appears he was fined $5k after the Rams’ season opener for failing to wear his pants below the knees. Gay typically wears his pants high up (almost like biker shorts) and has been doing so since his time in Tampa Bay.

The photos he posted, where his uniform follows the NFL’s rules, are hilarious. They’re clearly baggy and just don’t look right. It’s easy to imagine how the pants might get in the way of one’s kicking motion too.

Gay made that point by jokingly thanking the NFL for helping him “feel safe” and allowing him to do his job “super well” now with the right uniform. It’s A1 trolling from the Rams kicker.

Even fellow Ram Jalen Ramsey chimed in on the ridiculous uniform rules. It seems he shares the same sentiments, calling the situation a joke.

Nah they forreal want all of us to wear the uniform this way 😂… shid is a joke lol https://t.co/IqRAlW60hD

Another Rams teammate, David Long, might’ve said it best. Of all things, THIS is the hill the NFL wants to die on? That’s pretty wild…

I was literally about to post this. Of all the things to take a stance on they want to die on THIS hill. https://t.co/6VmDyKARzl

Even more so, the feelings appear the same across the league. Broncos safety Kareem Jackson expressed his frustrations with the league focusing on these rules that have no real impact on the game. Most people would agree that’s a reasonable complaint.

This is literally the only league that worries about shit that has nothing to do with the game. 5k fine for not coverage your knees is straight up BS

Saints RB Alvin Kamara was more amused by how the Rams kicker looked in the awkwardly fitting uniform. He jokingly suggests that everyone should adopt Gay’s new style. Now that’d be a hilarious sight to see.

Lol we all needa go out like dat. https://t.co/1gmL3lQiQ7

Ultimately, it’s just another classic case of the NFL being the NFL. Unfortunately for Matt Gay, it seems like something he’ll have to continue dealing with for now.