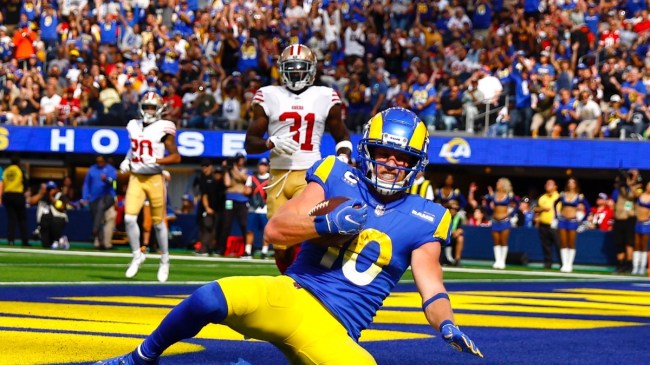 It would be hard to argue that a wide receiver in the NFL is more important to their team than Cooper Kupp is to the Los Angeles Rams. Last year’s receiving triple-crown winner is putting up huge numbers again and has 64 catches for 686 yards and five touchdowns through just seven games. He’s the focal point of the defending super bowl champion’s offense and without him, that offense becomes pretty barren of weapons pretty quickly.

But, in the Rams’ loss to the 49ers on Sunday, Kupp hurt his ankle in the late stages of the blowout.

Video of #Rams Cooper Kupp’s injury. Why is he in the game with 1 minute left?pic.twitter.com/1hQ5hMWgnz

Thankfully, the news is good.

At 3-4, they cannot afford to lose their best offensive player. And, thankfully, it appears he may not miss much time at all.

Cooper Kupp says so far things are pointing toward “him dodging a bullet” re. ankle injury. Further testing next couple days.

Sean McVay says he thinks Cooper Kupp’s ankle was the injury but isn’t sure. Said he’s “kicking himself” for Kupp being in and not calling to run the ball.

Cooper Kupp: “I feel pretty good right now.” He thinks he dodged a bullet with his injury at the end of the game. pic.twitter.com/MENQLVRpHn

That seems close to the ideal situation for the Rams once he got injured. Being without him for an extended period of time would have been really bad for a team that just cannot afford that right now.

Plus, fantasy owners around the country have to be rejoicing, as he’s a fantasy monster. If you have Kupp, it was pretty scary seeing him go down.

My Fantasy team was already awful with Cooper Kupp healthy. Now that he’s down, we’re worse than the Lakers

Ankle injuries can be tricky, but here’s hoping he can return for next week’s clash against the Tampa Bay Buccaneers in an absolutely massive game for both teams.