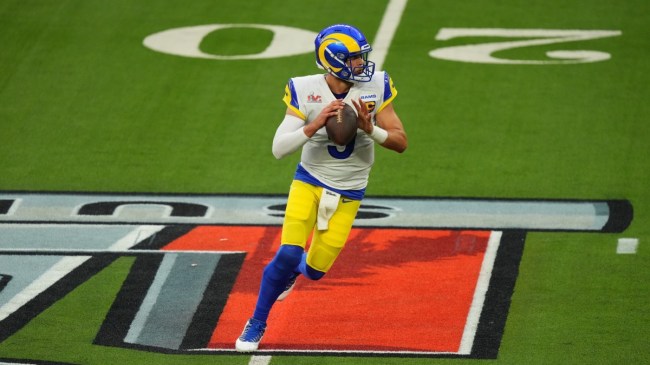 Last year was a dream season for Matthew Stafford and the Los Angeles Rams. The Rams took a massive risk trading for Stafford by giving up basically all of their immediate future draft capital.  It paid off, as the Rams won the Super Bowl over the Bengals in February. The Rams have a fair chance to repeat this year, but the injured Stafford was something that could get in their way.

It appears that will not be the case. Stafford seems to be ready to go for Thursday Night’s blockbuster opening-night game between the Rams and the Bills.

Sean McVay said there will be “no limitations” for QB Matthew Stafford Thursday night vs. Bills.

This pain in Stafford’s rocket right elbow is not new. He battled it last year and needed an injection in the elbow last season.

That led to him not throwing at all in the spring and being on a throwing schedule during training camp.

Of course, the injury did not bother him too much last year. Stafford threw for 4886 yards and 41 touchdowns en route to the Super Bowl. Still,  it had to have been concerning for Rams fans that it keeps bothering him.

McVay says there are no limitations for Stafford for Thursday Night’s opener.

The Rams play the Super Bowl-favorite Buffalo Bills at home on Thursday to kick off the season, and they will need their signal caller to be at full strength if they want to start the season 1-0. Thankfully, it appears they will, according to coach Sean McVay.

“No hesitation,” Sean McVay said, when I asked him that if he needed Matthew Stafford to throw 50-55 times to win a game, there’d be any hesitation.

The Bills come in fresh off of an 11-6 season and a divisional-round loss to the Chiefs in one of the great NFL games of all time. The Bills are currently road favorites with a line of -2.5.