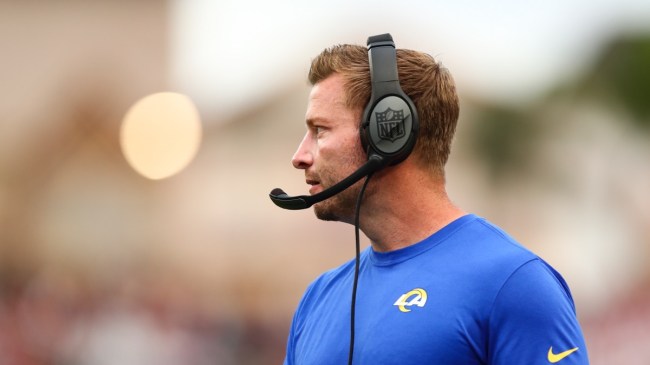 Last year was a cinderella season for the Los Angeles Rams. After acquiring longtime Detroit Lions quarterback Matthew Stafford in the offseason, the team found a way to win the Super Bowl, the first one as the Los Angeles Rams and just the 2nd in the Rams’ franchise history.

But, this year has not gone to plan. After a humiliating 16-13 loss to the Tampa Bay Buccaneers, they sit at 3-5 They blew another lead, and have been getting walloped all year in the 4th quarter.

The Rams broke the number one rule of football: you don’t give the ball back to Tom Brady with a chance to win the game, less than a minute left or not.

And, with the Seattle Seahawks two and a half games ahead at 6-3, it’s time to worry in LA.

Sean McVay thinks changes need to be made

After the game Sunday, Sean McVay had this to say at his press conference.

Adds, “changes have to be made.” Reiterates he’s a part of that, too.

The Rams are done. pic.twitter.com/etoawLKKqv

Brady’s specializes in 4th Quarter comebacks, and the Rams season is finished.

They need to turn it around, and turn it around fast. They could bring back Odell Beckham, who remains a free agent as he finishes up healing from the torn ACL he suffered in the Super Bowl. But, that won’t fix their offensive line or run game. It won’t fix Matt Stafford’s injured right elbow, either. They’re going to have to make due with what they have, and not even the great Aaron Donald is enough to overcome their shortcomings.

They take on the Cardinals next week in essentially an elimination game.